Bernie Sanders: Defensive on Guns, Half a Cheer for Rand Paul 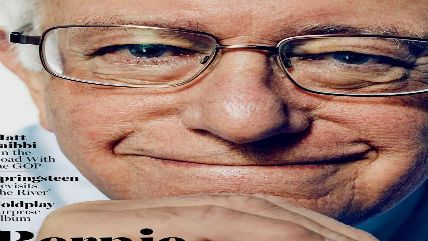 In the RS interview, conducted before that attack, he's more defensive about not being tough enough on guns and gun dealers for the modal Democratic Party voter, or RS reader:

RS: Why did you vote in 2005 to strip – from gun victims and the states that pick up the cost of gun violence – the same right to sue these gun companies? Didn't ending the threat of lawsuits remove any impetus to have safer products, or to clean up distribution networks to keep guns out of the hands of criminals?

Sanders: ….I come from a state that has virtually no gun control and, thank God [knocks on wood], has a reasonably low crime rate, OK? That is the culture of my state….

I had voted for instant background checks, to do away with the gun-show loophole. That's a pretty strong record for somebody that comes from a state that has no gun control. Every one of those votes was opposed by a lot of people in my state….

Now this legislation. We have a lot of gun stores in Vermont, small shops. If Mr. Smith, the gun-shop owner, sells you a gun legally, you have your instant background check, you get the gun. Then you flip out and you shoot your wife. It happens. Should the gun-shop owner be held liable for selling you the product?

RS: I would think the courts could make that determination.

Sanders: No. Well, let me make it: I don't think he should. I honestly don't think it should any more than if you picked up that table and banged me over the head and killed me. Would you hold that person [who sold the table] liable? We know what guns do. Guns have the capability of killing people. But I do not believe that somebody who lawfully sells a gun to somebody else should be held responsible if somebody uses that product wrongfully….

Sanders also had surprisingly a couple of nice things to say about, alone among Republicans, Sen. Rand Paul (R-Ky.):

I would say Rand Paul, on occasion, comes out and says something that is sensible. On the other hand, what did he recently say? That I'm like Pol Pot? So we don't want to overdo it here in expressing great sympathy for Rand Paul. But he has shown a consistent attention to the invasion of our privacy rights both from the federal government and corporate America. And he is much [more] reluctant than his colleagues to get us into another war. On those two issues, he has stood above the other Republican candidates.

Otherwise, the interview is mostly Bernie being Bernie, talking up nationalized health care, more stringent price controls on drugs, forcing the economy away from coal through taxes and other means, publicly financed elections (to ensure no incumbent ever loses again in history, though he doesn't say that's the motive, and I've always wondered what good supporters of it expect to accomplish from their own perspective minus an absolute ban on any political speech whatsoever not directly paid for out of those public funds), a $15/hour national minimum wage, breaking up big financial institutions and arresting CEOs (for what statutory violations he seems unsure), and other things he thinks are good ideas, damn the cost.

He also, on the more positive side, says he'd pardon more nonviolent drug offenders as president.

Mostly, Sanders continues to stake out his real ground, which isn't necessarily classical socialism of the "government control of the means of production" variety, but really just a superexpensive welfare state based on the principle that, hey, some people are really rich, tax 'em up the wazoo, it'll all work out.

The principle that anyone with more money than me should have some of it taken from them to give things either to me or people with less than me seems to absolutely light many people's souls on fire, so I'm not counting Sanders' chances out.