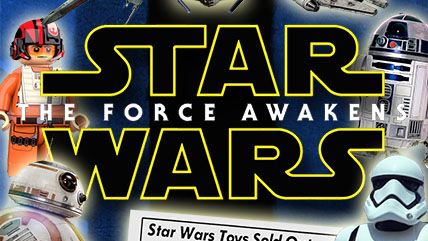 You can imagine the cha-ching sound that rung in every Star Wars collector's head when Disney bought Lucasfilm in 2012 for $4.05 billion and announced that it would be releasing new films. Fresh interest in the franchise meant fans would pay top dollar for toys that originally were bought for a few bucks. Now fancy auction house Sotheby's is auctioning a Star Wars toy collection owned by a Japanese DJ named Nigo. From CNN Money:

The auction is scheduled for December 11, just a week before the upcoming movie in the franchise, "The Force Awakens," appears in theaters. Toys that once cost a few dollars are now going on the block for thousands.

Some of Nigo's toys will look familiar to those who were caught up in the original "Star Wars" movie craze in 1977. The lot features action figures of Luke Skywalker, Obi-Won Kenobi, Chewbacca, C-3PO, Tusken Raiders and other famous characters who debuted in the original movie, Episode 4.

It's all a part of the Star Wars economy: an estimated $42 billion world of toys, games, clothes, books, movie tickets and practically everything else. For more, watch "The Star Wars Economy is Bigger Than You Think."