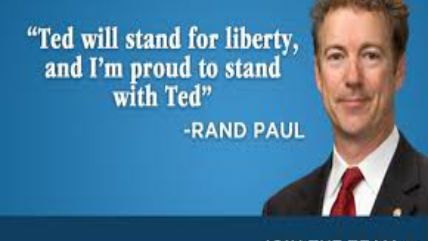 Florida Senator-in-name Marco Rubio has received foreign policy fire from both of his fellow "Tea Party" Senate colleagues** also fighting it out for the GOP presidential nomination. Rand Paul has been and is still doing so, we'll see below, but more newsy is that Texas Sen. Ted Cruz is also piling on.

Some political watchers in my social networking universes believe, for reasons I can neither gainsay nor endorse, that Ted Cruz is currently a most-likely-to-succeed in an imagined GOP field where Donald Trump and Ben Carson have been definitively winnowed out.

If that's so, it's encouraging that he's also going after Rubio on foreign policy, as Bloomberg reports, even taking up the Rand Paul technique of making Rubio's foreign policy look bad by saying it's the same as Hillary Clinton's:

"Senator Rubio emphatically supported Hillary Clinton in toppling [Muammar] Qaddafi in Libya. I think that made no sense," Cruz told Bloomberg Politics….He argued that the 2011 bombings that toppled the Libyan leader didn't help the fight against terrorists. "Qaddafi was a bad man, he had a horrible human rights record. And yet … he had become a significant ally in fighting radical Islamic terrorism."

"The terrorist attack that occurred in Benghazi was a direct result of that massive foreign policy blunder," Cruz said…

On Syria, Cruz inveighed against Rubio and Clinton, Obama's former secretary of state, for supporting a no-fly zone and arming "the so-called moderate rebels." "I think none of that makes any sense. In my view, we have no dog in the fight of the Syrian civil war," he said, arguing that Rubio and Clinton "are repeating the very same mistakes they made in Libya. They've demonstrated they've learned nothing."

Cruz said his decision-making test on military action would be about whether there's a "real threat" to American security….

Cruz also keeps saying he's not some withdraw-from-the-world-militarily loon and was winningly unwilling to lump all Muslims in as violent threats.

This shows some real growth or strategic change for Cruz, who back in June, as Matt Welch wrote about here, was trying to make sure he was to the interventionist right of Paul. Now he's at least not afraid to echo Paul in attacking Rubio for foreign policy recklessness.

Doubtless Cruz may see need to distinguish himself from Paul in foreign policy as well as the campaign goes on, and he did, Bloomberg paraphrased, portray "himself as a third way between the stalwart, non-interventionist views of Senator Rand Paul and pro-interventionist policies in pursuit of spreading democracy and human rights through the Middle East that Rubio espouses."

That Rand Paul is still bashing Rubio similarly isn't really news per se, but it's good that it keeps happening, as per an article by Sen. Paul that ran in Time magazine, which tried the intended-to-appeal-to-GOP-voters tack of first linking Rubio's foreign policy thought with Hillary Clinton's, and pointing out its relation to both ignoring the Constitution and endless debt (though the idea that a modal GOP voter still cares in an intelligent way about the Constitution seems weaker and weaker by the day):

The Clinton/Rubio foreign policy advocated for direct force to enact regime change in Libya and Syria. Their only difference of opinion was in the degree of direct force necessary. Clinton and Obama tend to intervene but primarily by armaments and air power. Rubio, on the other hand, beats his chest and insists we must also have American boots on the ground in Libya, Syria, Iraq, Nigeria, and anywhere else terrorism arises.

When I forced the Foreign Relations Committee to debate an authorization of military force against ISIS, Senator Rubio and McCain insisted that the new authorization be unlimited temporally or geographically. Basically, they want a war without end against an undefined enemy in an unspecified region of the world…

Senator Rubio wrote the President at the time that he saw "no legal reason preventing" him from using his "commander-in-chief" powers to attack ISIS. His letter makes no mention of the Constitutional requirement to seek Congressional authority.

….I hope voters will seek out a leader who will learn from history and not pursue a reckless policy that seeks to liberate the world but in reality traps us under a mountain of debt and beguiles us into perpetual war.

**Correction: Post originally referred to all three Senators as part of "Class of '10"; Cruz was elected in 2012.