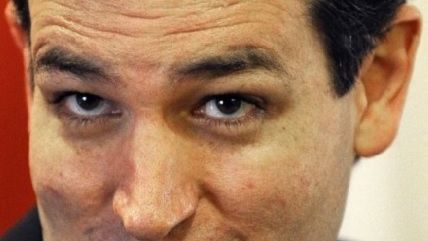 UPDATED (5:50 P.M. ET): From The Gazette of Colorado Springs, Colorado comes word that alleged shooter Robert Dear did not "register as a woman."

An El Paso County clerical error was apparently to blame for Planned Parenthood shooting suspect Robert Lewis Dear Jr. being listed as a woman on his voter registration card—a detail that fueled national speculation over his gender identity.

To his credit, Sen. Ted Cruz (R-Texas) at least didn't flinch at describing the murder of three people at a Colorado Springs Planned Parenthood clinic over the weekend as a tragedy and a criminal act.

But Cruz being Cruz, he couldn't stop there. And so when asked about reports that the alleged shooter, Robert Lewis Dear, had mentioned the selling of "baby parts" as part of his motivation for his spree after being taken into custody, Cruz first said, "We don't fully know the motivations of this deranged individual."

That's all good. But the debating champ then immediately added:

We know that he was a man who registered to vote as a woman….It's…reported that he's registered as an Independent and as a woman [and is] a transgendered leftist activist.

Go here for audio and video.

A campaign spokesperson then clarified to Buzzfeed:

The candidate was not suggesting anything in particular about the alleged killer's identity, and only made reference to the report in order "to make the point that we don't know all the details."

Yes, we still don't know all the details but for god's sake, don't treat people like they are idiots, would you? So we don't fully know…TRANSGENDER LEFTIST ACTIVIST!

The source for Cruz's claim in Gateway Pundit, which dug up Dear's voter registration card that indeed lists him as a woman. OMG! Evidence that such a designation is  starters, none of the guy's neighbors have yet described anything that would suggest Dear identified as a woman. Rather, he had been arrested various times on various charges (such as peeking into neighbors' windows) and he liked to be left alone.

There's no question that the left, just like the right, is always amazingly quick to claim that every sunrise and sunset, not to mention natural and man-made disaster, perfectly proves its worldview. So Cruz has plenty of company in immediately dumping a wheelbarrow of red herring on to the table. But don't pretend it has anything to do with anything other than retail politics.

I would not be surprised if the next wave of right-wing psychologizing of Dear suggests that he was not only transgender but he was driven mad by either the absence or the presence of unisex bathrooms at Planned Parenthood, which he doubtless mistook for a bank.