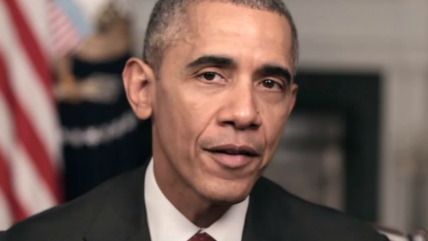 This is not normal. We can't let it become normal. If we truly care about this—if we're going to offer up our thoughts and prayers again, for God knows how many times, with a truly clean conscience—then we have to do something about the easy accessibility of weapons of war on our streets to people who have no business wielding them. Period. Enough is enough.

We have to do something, the president says. But what exactly? It is not surprising that Obama did not bother to address that question, because there is no good answer to it.

According to people who knew him, Robert Dear, the man arrested for killing three people and injuring nine in last week's attack, was an eccentric, off-putting loner with anger issues. But he apparently did not have the sort of criminal or psychiatric record that would have prevented him from legally buying a gun.

In 1997, The New York Times reports, Dear's then-wife "told the police that he had locked her out of her home and had 'hit her and pushed her out the window' when she tried to climb in." She did not pursue charges against him but "wanted something on record of this incident occurring." Five years later Dear was arrested "after a neighbor told the police that he had hidden in the bushes in an attempt to peer into her house." The charge against him was dropped. That seems to be the full extent of Dear's criminal record, which means he was never convicted of a felony or of a misdemeanor involving domestic violence.

It also looks like Dear never underwent court-ordered psychiatric treatment. NBC News reports that "there would have been nothing apparent in Dear's background—including a felony conviction or previous mental health issue—that would have disqualified him" from buying firearms. That means stronger enforcement of current restrictions on gun ownership, including the "universal background checks" that Obama supports, could not have prevented Dear's attack, as is typically the case with mass shootings.

What about imposing new restrictions on gun ownership? It is bad enough that current law disarms millions of Americans who would never have used a gun to harm anyone, including illegal drug users and people convicted of nonviolent felonies. It would be even worse to start stripping people of their Second Amendment rights based on unproven allegations of domestic violence or other antisocial behavior, let alone general creepiness.

An even less promising approach would be to focus on the particular weapon that Dear used, which NBC describes as an "AK-47-style" rifle. Although Obama referred to "weapons of war" and various news accounts erroneously described the gun as an "assault rifle" (which by definition is capable of automatic fire), it was actually a so-called assault weapon (a term Obama also used), an arbitrary category defined by military-style features that do not make a firearm any more lethal in the hands of a mass shooter. Dear could have done the same damage with an ordinary hunting rifle. That means reinstating the federal "assault weapon" ban, which Obama also favors, would not have made a difference in this case, even if the law ordered the confiscation of all the military-style rifles already in circulation.