Surprisingly, the 28th president still has his defenders on the left. 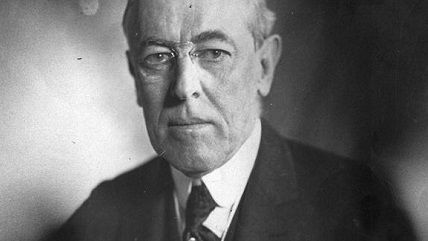 Last week a group of students at Princeton University occupied the office of the school's president and demanded that the institution remove the name of Woodrow Wilson from all campus buildings and academic programs, including the elite Woodrow Wilson School of Public and International Affairs. Why? Because Wilson was a virulent racist who imposed white supremacist policies while serving as president of the United States. As one student protestor told The New York Times, "we think that you can definitely understand your history without idolizing or turning Wilson into some kind of god, which is essentially what they've done."

Not everyone is quite so eager to see Wilson knocked off his pedestal, however. Writing at Politico Magazine this week, left-wing New York University professor Jonathan Zimmerman attempted to defend the beleaguered 28th president by reminding the ungrateful student activists about Wilson's pioneering progressive agenda. Sure, Wilson may have been a racist, Zimmerman admitted, but "the Progressive doctrines espoused by Wilson" ushered in a new era of activist government that was ultimately "reflected" and enshrined in Franklin Roosevelt's New Deal. Wilson was a founding father of modern liberalism, Zimmerman insisted, and therefore "deserves a good deal of credit" for improving the lives of "America's poor and dispossessed, including minorities."

I never cease to be amazed when I encounter this sort of liberal apologia for Woodrow Wilson. This is the same Woodrow Wilson, after all, who imposed Jim Crow on the federal government, praised segregation, glorified the Ku Klux Klan, spied on innocent Americans, censored the mail, trashed the Bill of Rights, and imprisoned multiple critics for the "crimes" of giving speeches, writing editorials, and distributing pamphlets. As H.L. Mencken once remarked about the ugly record of another unlikely liberal hero, Justice Oliver Wendell Holmes Jr., "If this is Liberalism, then all I can say is that Liberalism is not what it was when I was young."

The upshot of Zimmerman's article seems to be that Wilson's racism should be weighed separately from his progressive agenda. But in fact the two were inseparably linked. And that was not just true for Wilson. The entire Progressive movement had a terrible record on race. Many progressives either shared Wilson's hostility to African Americans or were essentially indifferent to the plight of blacks. In the South, as historian David Southern has noted, vile practices like disfranchisement, segregation, and lynching all "went hand-in-hand with the most advanced forms of southern progressivism." Wilsonian progressives basically built their welfare state for whites only.

That uncomfortable fact becomes evident when you consider how "the Progressive doctrines espoused by Wilson" bore fruit during Franklin Roosevelt's New Deal. Although FDR is still sometimes celebrated as a champion of the downtrodden, even the most left-leaning of scholars will now reluctantly concede that the New Deal was mostly a raw deal for blacks. New Deal housing policies, for example, promoted the notorious red-lining of black neighborhoods. New Deal war policies shored up segregation in the armed forces. New Deal labor policies threw blacks out of work and granted monopoly bargaining powers to racist unions.

That last point is particularly illustrative. Under Section 7A of the National Industrial Recovery Act of 1933, the federal government gave organized labor a windfall by embracing the concept of exclusive collective bargaining arrangements. What that meant was that once a union received the support of a majority of workers at a given business, that union was granted the exclusive authority to represent all workers at that business, including those workers that voted against joining the union in the first place. Under this federal scheme, no other union representation was permitted at that workplace. And since most unions had long histories of excluding blacks, this grant of monopoly power had the predictable result of preventing countless black Americans from finding or keeping unionized jobs.

The racist implications of this major New Deal policy did not go unnoticed at the time. Here's how The Crisis, the official magazine of the NAACP, described it in a 1934 editorial:

Seeking to avail itself of the powers granted under section 7A of the NRA, union labor strategy seems to be to form a union in a given plant, strike to obtain the right to bargain with the employers as the sole representative of labor, and then to close the union to black workers, effectively cutting them off from employment.

The Chicago Defender, then America's leading black newspaper, denounced the union friendly NRA as the "Negro Removal Act," "Negro Run Around," and "No Roosevelt Again." According to civil rights leader W.E.B. Du Bois, "the most sinister power that the NRA has reinforced is the American Federation of Labor."

Perhaps it should go without saying, but this stuff is not just ancient history. There are black Americans alive today who still bear the scars—financial and otherwise—inflicted by racist government policies crafted by Wilsonian progressives and Wilson-inspired New Dealers. The fact that the federal government finally, reluctantly began mending its ways several decades later in response to the Civil Rights Movement does nothing to take Wilson and FDR off the hook.

To be sure, the progressives and the New Dealers did accomplish some worthy things in their day. But let's not whitewash the fact that those same progressives and New Dealers also did some terrible things to untold numbers of black Americans. If we're going to discuss Woodrow Wilson's record on race, we must be mindful of the entire story.