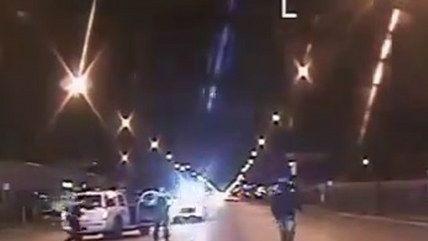 Chicago was given until Wednesday to release the footage, but they decided this evening, following a press conference, to release the dash cam video that shows Chicago Police Officer Jason Van Dyke shooting Laquan McDonald, 17, dead during a confrontation on the street in October, 2014. Van Dyke was charged with murder earlier today for pumping 16 bullets into McDonald.

Apparently so many folks attempted to access the Chicago Police's website to see the video that the site crashed. Fox 10 in Phoenix was able to get through. They uploaded the video on YouTube. I've embedded it below. There is no sound, but it's still pretty disturbing. The confrontation starts at about 5 minutes in:

As was detailed in coverage before the video's release, McDonald was clearly walking away from the officers, not toward them or lunging aggressively when Van Dyke opens fire. Then he falls almost immediately to the pavement, not moving at all as the officer keeps shooting.  Reuters has more on the current situation here.