Republicans and Democrats join together to spend more money. 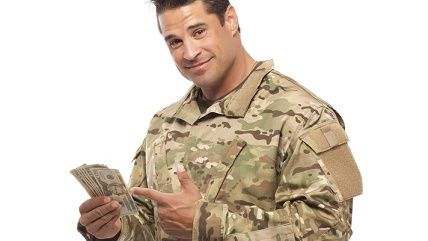 There's no choosing between guns and butter in Washington. With virtually no limit on what the federal government can spend other people's money on, policymakers have been loading up on both for decades, and they aren't about to let limits that they themselves created get in the way. The pesky budget caps that were accidentally installed in 2011 put a modest brake on spending, but the recent passage of the Bipartisan Budget Act of 2015 increased allowable funding under those caps—for the second time. And sure enough, the deal promises more guns and more butter.

The deal gives Republicans and Democrats an extra $80 billion in funding—split evenly between defense and non-defense—to play with over the next two fiscal years. That's bad enough. But what's really galling is the continuing manipulation of an account that exists to fund America's never-ending wars without Congress' having to worry about finding a way to pay for them with cuts elsewhere.

The budgetary device called the Overseas Contingency Operations account, or "war fund," started off as a supplemental appropriation to fund the military response after the Sept. 11, 2001, terrorist attacks. But it quickly became a slush fund that allows policymakers to spend gobs of money with little oversight and fatten the Pentagon's base budget when the spending caps are put into place, seeing as OCO funding is exempt.

How much funding has been run through this war fund? Including the $74 billion in OCO funding that the budget deal assumes for the current fiscal year, Washington will have used the fund to skirt budget protocol to the tune of over $1.75 trillion since 2001. Regardless of how one feels about U.S. foreign policy, to make a mockery of the already mock-worthy federal budget process for 16 years running is disgraceful even by Washington's bottomless standards.

The OCO has been particularly kind to hawkish Republicans and their allies in the military-industrial complex. And now, thanks to that no-Pentagon-budget-is-too-big crowd, Democrats—who have been lamenting the budget caps' restrictions on non-defense domestic spending—have received a second gift in the budget deal. Of the $1.75 trillion in OCO funding since 2001, 93 percent has gone to the Pentagon. But the rest went to the State Department and other diplomatic efforts ostensibly related to the wars the OCO account was created to fund. An average of $7 billion has gone to these non-Pentagon buckets each year. Under the deal, that amount will more than double, to almost $15 billion both this fiscal year and the next.

What that means is that Democrats (and their Republican allies) can cut back on normal funding for the State Department and related agencies that are subject to the cap restrictions, because they have that extra "war money" to make up the difference. They can then use the budgetary room freed up by shifting standard funding under the cap to exempted OCO funding to spend more money on all sorts of domestic programs.

Confused? That's OK; it's supposed to be confusing.

Indeed, the political class thrives on being able to pull the wool over the eyes of the electorate. Just know that unless you're on the receiving end of the bipartisan largesse contained in the budget deal, you're getting the short end of the stick.