On Campus Free Speech, the Bad Guys Have Won [UPDATED] 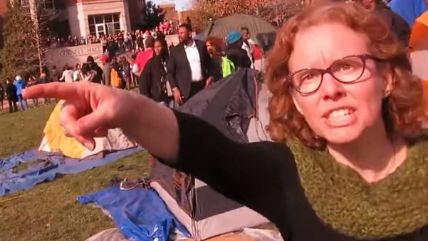 Quite appropriately, given what has been one of the most ridiculous weeks in the modern history of campus free-speech wars, the Wall Street Journal's new [UPDATE: this isn't new at all; it's from 2012; the paper just re-upped it given news events!] "Weekend Interview" is with a character well-known to Reason readers, Foundation for Individual Rights in Education (FIRE) President Greg Lukianoff.

Lukianoff, who was right there in the middle of the amazing Yale unpleasantness from last week, shares some grim conclusions with interviewer Sohrab Ahmari:

"The people who believe that colleges and universities are places where we want less freedom of speech have won," Mr. Lukianoff says. "If anything, there should be even greater freedom of speech on college campuses. But now things have been turned around to give campus communities the expectation that if someone's feelings are hurt by something that is said, the university will protect that person. As soon as you allow something as vague as Big Brother protecting your feelings, anything and everything can be punished." […]

Growing up in an immigrant neighborhood in Danbury, Conn., sharpened his views. When "you had so many people from so many different backgrounds, free speech made intuitive sense," Mr. Lukianoff recalls. "In every genuinely diverse community I've ever lived in, freedom of speech had to be the rule….I find it deeply ironic that on college campuses diversity is used as an argument against unbridled freedom of speech."

Then there's this reminder that, in the best traditions of the real free speech movement, defenders go where the fight is, not where their ideological allies are:

Conservatives and libertarians are especially vulnerable to such [campus] charges of harassment. Even though Mr. Lukianoff's efforts might aid those censorship victims, he hardly counts himself as one of them: He says that he is a lifelong Democrat and a "passionate believer" in gay marriage and abortion rights. And free speech. "If you're going to get in trouble for an opinion on campus, it's more likely for a socially conservative opinion." […]

The whole article, filled with all kinds of outrages (including some I wasn't familiar with, such as Fordham University President Joseph McShane browbeating the local College Republicans out of inviting Ann Coulter to speak), is worth reading in full. Also worth clicking: Lukianoff's two original contributions to Reason: "P.C. Never Died" (February 2010) and "Campus Censorship and the End of the American Debate" (March 2014).

Here's a great Reason TV video from May 2014 that features Lukianoff prominently: "Trigger Warnings, Campus Speech, and the Right to Not Be Offended."

And here's Lukianoff talking with beloved New York Times science writer John Tierney a year before that at The Museum of Sex: