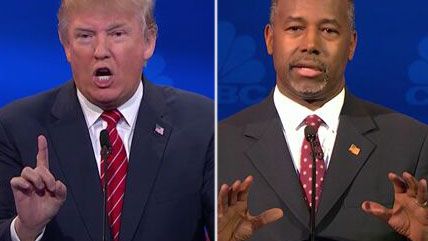 Bask, for a moment, in the populist spectacle of Donald Trump's rambling, angry, hour-and-a-half-long rant of a speech in Iowa last night, via this highlight reel from The Washington Post:

He scoffed at those who have accused him of not understanding foreign policy, saying he knows more about Islamic State terrorists "than the generals do." He took credit for predicting the threat of Osama bin Laden and being right on the "anchor baby situation," a position he says "these great geniuses from Harvard Law School" now back. He uttered the word "crap" at least three times, and promised to "bomb the s—" out of oil fields benefiting terrorists. He signed a book for a guy in the audience and then tossed it back at him with a flip: "Here you go, baby. I love you."

Trump called Republican rival Carly Fiorina "Carly whatever-the-hell-her-name-is," accused Democratic front-runner Hillary Rodham Clinton of playing the "woman's card" and said Sen. Marco Rubio (R-Fla.) is "weak like a baby." He then devoted more than 10 minutes angrily attacking his chief rival, Ben Carson, saying the retired doctor has a "pathological disease" with no cure, similar to being a child molester.

It's not pretty, but it's really something to behold—an extended, angry, sneering, vindictive attack on Carson's character and biography that would be unimaginable coming from any other candidate. Trump's argument, to the extent that it can be summarized, is that the press has been trying to paint Carson as an exaggerator, when the real problem is that Carson claims to be telling the truth about his history of violent incidents. As usual, Trump, in his ugly, unhinged way, has managed to zero in on his rival's biggest potential weakness.

Yet at the same time, he may have revealed his own. Trump's attack on Carson comes across not only as typically (for Trump) aggressive, but as unusually anxious. More than any other candidate, Carson seems to have rattled Trump.

Trump claims to be mystified about Carson's success in the polls. "That's who's in second place," he says of Carson, after describing the neurosurgeon's history of outbursts. "And I don't get it."

At least when it comes to the polls, Carson, who is practically tied with Trump in the RealClearPolitics average (and beating him in some individual surveys), is Trump's only real competitor at the moment. It's not hard to understand why: Trump and Carson are flip sides of the same phenomenon.

Yes, both candidates are Washington outsiders with no previous political experience and little interest in the details of policy.

But in most other ways, they are opposite numbers: Trump's style is angry, aggressive, hot-tempered and prone to over-the-top insults; Carson, in contrast, is gentle, kindly mannered, and soft-spoken to the point of coming across as sleepy. Trump is a mainline protestant who rarely speaks about his faith; Carson is a Seventh Day Adventist whose religious commitments are central to his life and campaign. Trump made his fortune as a brash, big-picture dealmaker and money-man whose high-profile projects often went bust; he worked with his ego and his mouth. Carson made his reputation as a careful surgical innovator, working on delicate surgeries where there was no room for error; he worked with his intelligence and his hands. Trump grew up wealthy and privileged in New York, and his real estate career was kickstarted by a generous seven-figure loan from his father; Carson grew up poor in Detroit, and studied and struggled his way into the ranks of elite medical practitioners. Carson's persona is practically the inverse of Trump's persona.

And that makes Carson the biggest potential threat yet to Trump's so-far surprisingly durable campaign. The same forces that have helped Trump are also helping Carson. Carson has all of Trump's outsider credibility, all of his anti-political appeal, which means that he can't be dismissed as a typical Washington politician. He also has a life and back-story that are just as personally compelling, in their own way, as Trump's, yet also radically different.

I say potential threat because it is clear that Trump clearly does not operate by the normal rules of politics and does not have the weaknesses of a conventional presidential candidate. We shouldn't assume that his campaign is invincible, but at this point, we also don't know what can hurt him.

Yet the same can be said of Carson—and that may be why Trump, whose political instincts have proven surprisingly accurate over the past few months, suddenly seems so nervous.