Obamacare Has Gone Missing from the GOP Debates. That's a Problem. 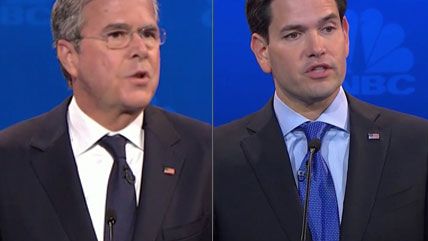 Obamacare has gone missing from the GOP debates.

No, it's not entirely invisible, but over the course of four Republican primary showdowns, the topic has only occasionally been raised, and even more rarely debated or discussed in detail. An issue that for the last five years has been a policy priority and top talking point for Republicans has mostly receded into the background.

And, interestingly, that's happened at the same time that several GOP candidates have finally started to release plans, or at least frameworks, to replace the law. First there was Scott Walker, then Marco Rubio and Jeb Bush followed with their own similar plans. (Donald Trump, as is typical, has declared his support for policy nonsense.)

It's not exactly as if the topic has been dropped from the campaigns entirely: Jeb Bush published an op-ed in The Washington Post just this week laying out the basics of his replacement plan. Nor has the topic disappeared from Capitol Hill. Republicans in Congress are hashing out details of a repeal bill this week.

But in the debates, the issue is minimally visible. Several candidates briefly mentioned repealing and replacing the law during Tuesday night's debate, but only Carly Fiorina discussed it at any length, criticizing the law as a crony capitalist deal made with drug companies and the insurance industry, mentioning almost as an aside that she would rely on state based high risk pools for difficult to cover individuals, but focusing mostly on the problems with the health law as it exists now.

Part of the reason why, of course, is that moderators haven't made a point to ask about it very much. But as anyone who has ever watched a journalist interview a politician knows, the answers politicians give to questions frequently don't reflect the question asked. So far, then, it appears that the GOP candidates have made a deliberate choice not to raise the issue very much, and not to dwell on the details of their replacement plans, even as they are starting to make the details known.

That's a sign of how substance-free these debates have been so far. It's also a problem for critics of the law who would like to see it repealed or significantly reformed.

For one thing, it means that these issues won't be hashed out on stage before the general election debates next year. And make no mistake: Obamacare will be a major point of contrast between the Democratic nominee, who is almost certain to be Hillary Clinton, and who ever wins the Republican primary. Even though the larger, more chaotic primary debates differ from the general election head-to-heads significantly, these early events can serve as testing grounds for descriptions that can help prepare the candidates for the inevitable main stage questions about the health law.

The bigger problem, though, is that it's a lost opportunity. The GOP primary debates have been major media events drawing huge viewership; it's the biggest show on cable television right now. And that means it's a major opportunity to make a case, both to the general public, and, specifically, to Republican voters. One of the biggest problems for Obamacare replacement over the years has been that Republicans and conservatives themselves have not agreed on what to do.

Republican politicians do appear to have to begun unifying around the broad outlines of a plan (though there remain notable dissenters), but little of this has been hashed out for the public or the base in what is now the party's most visible forum. And that means that some legitimate criticisms of the major candidate replacement plans—many from the right—have gone relatively unheard.

Selling and passing a significant health and entitlement reform is an extremely tough job in any imaginable circumstance. It's even harder without a broad consensus amongst the party's base as well as its political elites. With the debates, Republican candidates have a major opportunity to make their cases, and explain themselves, to millions of people, including many of their own voters. So far, it's an opportunity they're largely missing.