The Dangers of Trump's Militaristic Isolationalism

Trump is a threat to the United States and the world. 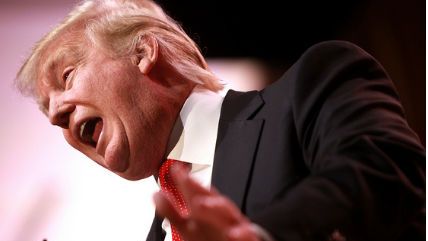 Donald Trump has crowned himself the winner of last night's debate. That is debatable—so to speak—but what's

not is that Trump has hit a nerve in the American psyche. Diffusing him will require understanding what exactly it is.

Many attribute his success to a loud-mouthed, no-holds-barred persona. That's certainly part of it, but that's not all there is. Indeed, the core element of his attraction to conservatives isn't his un-PC pomposity, but his promise of radical isolationism. Trump promises to "Make America Great Again" by using its military might to cordon the U.S. off from the evils of the world.

To understand Trump the isolationist, you have to first understand what he's not. He isn't a liberal, for sure. But his Republican rivals are also correct when they grumble that he's no conservative either. Trump is, after all, an erstwhile supporter of a Canadian-style single-payer health care system. He has no discernible commitment to limiting the size or scope of government. In fact, his campaign rhetoric is remarkably free from obligatory jeremiads against a lumbering federal bureaucracy crushing the animal spirits of American entrepreneurs. He pays lip service to the evils of crony capitalism because he instinctively understands its populist appeal, yet he simultaneously boasts about exploiting it. ("If you can't get rich dealing with politicians, there's something wrong with you," he harumphs.) Meanwhile, Trump issues blasphemous defenses of eminent domain—maintaining, incredibly, that rank-and-file conservatives oppose government seizures of poor people's private property on behalf of rich developers like himself only because no one has explained to them the public benefits of such grabs.

Trump is similarly not a fiscal conservative worried that America's ballooning entitlement state will bankrupt the country—a concern that has preoccupied serious Republicans for decades. The hapless Jeb Bush is promising to slash 10 percent of the federal workforce. Paul Ryan, the new speaker of the House, has staked his career on reforming old-age entitlement programs such as Social Security and Medicare and offering serious proposals to repeal and replace ObamaCare. Trump just yawns at all of this.

Trump is not a cultural conservative either; he wouldn't know "family values" if they hit him in the face. A twice-divorced Manhattan playboy, he once actually said if Ivanka Trump weren't his daughter, he'd date her because she has a "very nice figure." More to the point, he has no serious religious convictions, was never against gay marriage, and actually supported abortion rights for women.

None of this bothers Trump's conservative supporters. Why? Because they are preoccupied with the threat a fast-changing external world poses to them far more than the depredations of their own government. Hence, Trump's radically isolationist ideology—seeing the world not as a place full of opportunities waiting to be harnessed but a giant rip-off—resonates with them. His vow to "Make America Great Again" by nixing America's overseas commitments, slashing trade, and ejecting welfare-mooching foreigners makes perfect sense to many conservatives. Ann Coulter, perhaps Trump's biggest fan, has declared that she wouldn't care if he conducted abortions in the White House so long as he mass deported immigrants as he's promised.

In a fundamental sense, Trump is the anti-Reagan—and not only because his dour belligerence contrasts sharply with Reagan's sunny optimism. Reagan saw endless opportunities for mutual advancement in the world—and some threats. To guard against the threats, he wanted to build an impenetrable (if pie-in-the-sky) defensive shield around America. Other than that he wanted the country to stay open to foreign workers and foreign businesses—and he wanted the world to do the same. His exhortation to Mikhail Gorbachev to "tear down" the Berlin Wall was based on Reagan's desire to open the Soviet Union to the outside world.

Trump wants to do the opposite. Sure, he calls himself the "most militaristic person" there is, and promises to make America's already strong military even bigger and stronger and greater. But what precisely does he want to use it for? He says he has no intention of spreading American democracy at gunpoint—a la George W. Bush's Iraq debacle (Trump rightly calls rivals like Marco Rubio, who want to escalate America's involvement in Syria to counter Vladimir Putin, not "hawks but fools"). Trump also has no interest in engaging in humanitarian interventions to protect vulnerable populations—a la Obama's Libya disaster.

Trump's military would be used as leverage to strong arm the world into doing America's bidding—whether that means forcing Mexico to build a wall on the Rio Grande, forcibly taking Iraqi oil as payment for getting rid of Saddam Hussein, imposing massive tariffs on companies that shift operations abroad, stopping China from "manipulating" its currency, or forcing South Korea and Europe to pay for America's security guarantee. In his universe, there is no win-win. It is either exploit or be exploited.

Everything on that wish list is bonkers, with the possible exception of the last item. But what's genuinely unhinged about it is that Trump is convinced that such policies can painlessly restore the American middle class. "All the Republicans are talking about, 'We're gonna cut, we're gonna raise the age, we're gonna do this, your Medicare, your Medicaid, your Social Security,'" he thunders. "I can bring wealth in so that we can save your Social Security without cuts."

In short, Americans don't have to compete for jobs or endure cuts to old-age entitlement programs; they just have to keep thuggish foreigners from bilking their wealth or taking advantage of them. This might be a comforting vision—but it is also cartoonish and dangerous.

The last time America tried Trump-style protectionism and imposed the 1930 Smoot-Hawley tariffs, it triggered a global trade war that turned an economic downturn into the Great Depression. His plans to shake down Mexico to pay for a wall would incense all of Latin America. And his proposal to forcibly take away Iraqi oil would breed even more anti-American hatred around the world—not to mention terrorism.

If Trump's challengers want to prevent his loopy ideas from permanently poisoning the policy conversation, they'll have to stop pussyfooting around—and start exposing Trump for the snake-oil salesman he is. He is dangerous for America and the world.