A DMV for Drones? Inside the FAA's Clumsy Push to Regulate Flying Computers

A series of poor proposals from the Federal Aviation Administration threatens to ground much of the commercial drone industry before it even takes flight. 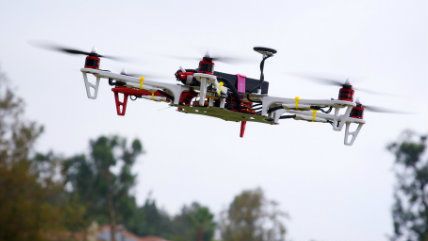 At long last, commercial drone technology has developed to the point where businesses and consumers alike can take them to the skies for fun and profit. The benefits of mass drone flight are projected to be enormous, with applications ranging from instant package delivery to manufacturing to lifestyle video-blogging. But a series of poor proposals from the Federal Aviation Administration (FAA) threatens to ground major parts of this hot industry just as it starts to take flight.

Drones, or "unmanned aerial vehicles" (UAVs) as the acronymically-inclined like to call them, are merely computers with wings. They range in size from charming toys weighing under a few pounds to crafts that are almost large enough for human passengers. They can be controlled by a human operator on the ground, like a model aircraft, or they can be pre-programmed to autonomously zip across the skyline on their own, aided by a series of gyroscopes, aerodynamic blades, transmitters, sensors, and cameras that allow these winged robots to quickly detect and avoid objects in their flight path.

Drones can act as synthetic extensions of ourselves, allowing us to explore and interact with environments far beyond our normal reach. As mobile computers, they help us to better extract useful data from the world around us to improve how we get things done. And as platforms for engagement with a new airspace frontier, they are a critical check on government power and a possible tool for resistance to those in oppressive situations. They're really, really cool, and they're poised to contribute much to both our economy and general standard of living.

But before mass drone use can be cleared for take-off, there's one major hurdle left to overcome: Safe integration within the airspace commons. Commercial drones should not be able to whiz about willy-nilly, wreaking havoc as they may. What we need is a clear set of rules, tools, and communication protocols that will allow drone users to responsibly share the air with manned aircraft and avoid causing harm to others down below, just as we have for cars on the road and boats on the water.

Entrepreneurs and technologists are optimistic about this challenge. Even Congress has been surprisingly forward-looking on this issue, directing the FAA in 2012 to begin developing institutional reforms for safely integrating drones into U.S. airspace through the FAA Modernization and Reform Act (FMRA). UAVs weighing less than 55 pounds were to be integrated by August 2014, while larger commercial crafts would be operationalized by no later than September 30, 2015.

Many proposed integration solutions would not require much in the way of new government bureaucracy; rather, we could build on existing air traffic control procedures. For example, manned aircraft pilots are already required by the FAA to register and clear their flight paths before takeoff. Commercial drone operators could check to make sure manned flights don't intervene with their intended routes and modify if necessary before launching. All aircraft could be informed of others' positions through wireless communication, and drones could be programmed to avoid other crafts should bad weather or unexpected obstacles cause them to deviate from their route. And, in the worst case scenario, an appropriate liability regime could facilitate proper compensation for any potential harms that do arise.

With a bit of foresight and focus, the FAA could have been a champion for the drone industry, ushering in a new era of aerospace innovation. The FMRA afforded the agency ample time to investigate, tweak, and begin promulgating such innovation-friendly institutional reforms. If the FAA met its legislative deadlines, we could have already been enjoying the considerable economic benefits of commercial drone use by now. Unfortunately, the FAA has instead become one of the biggest barriers to the future of drone flight.

First, the FAA failed to meet the FMRA deadlines for drone integration. The agency was unable to complete these tasks on time even after a concerned Congress issued an extra $3 million in appropriations in 2014 to help the struggling aviation regulators get their acts together. A June 2014 report by the agency's Inspector General found that the FAA had not even started to develop the necessary data analysis or safety reporting processes several years into the project. Meanwhile, American entrepreneurs and drone enthusiasts had little guidance about how to proceed—or whether their audacity to innovate could be ultimately determined to be criminal.

For a while, the FAA acted as if commercial drone flights were outright banned until further notice. Bowing to understandable pressure from the drone industry and the pesky arm of the law, the agency eventually decided to get clever with its exemption authority to bridge the gap. Section 233 of the FMRA outlines a process for drone operators to petition to fly registered crafts in U.S. airspace before the final rules are issued. Over 2,000 Section 333 exemptions have been issued since the FAA began extending them in late 2014, with recipients using them to perform activities such as university research, video journalism, and delivery testing.

Allowing commercial drone testing was a long-overdue step in the right direction, but the current ad hoc exemption-application process is inefficient and unbecoming. It would have been nice if the FAA made good use of its healthy time extensions to put out some solid regulations, but this was apparently too much to ask.

In February of this year, the FAA finally released its small drone regulations for public comment. The best that can be said about the proposed rules is that they at least clarify that small commercial drone operations will indeed be legal. But the hackneyed requirements the rules would impose in the name of "safety" border on the absurd. For one, operators would be limited to flying one drone at a time during certain hours, even over areas without any humans below. What's more, autonomous drones may be out of the question if the FAA holds fast to its odd insistence that operators maintain "line of sight" procedures during the entire flight. Industry, academic, and legal professionals submitted over 4,500 comments on this proposed rule, but it's unknown when the FAA will respond or issue final regulations. Given their track record, low expectations seem appropriate.

Then there's the new recreational drone-registry scheme that the FAA randomly announced in October. The agency might have missed its September 30 deadline to issue large commercial drone rules, but it summoned a new optimism that the agency can develop and instate a nationwide database for hobbyist UAV sales in time for the hectic Christmas season.

There are a lot of problems with this proposal, mostly revolving around the dubious feasibility and legality of the plan. First of all, running a national registry is difficult, expensive, and rarely worth the headache, as previous experiments with gun registries in New York and Canada can attest. Hundreds of thousands of drones have been sold already, raising the tricky question of how to compel current drone owners to submit to the registration process. Will there be penalties for non-compliance? When should people be required to register? Are registrations transferrable? How should the registry treat do-it-yourself drones that are not purchased at a store? And exactly what qualifies as a "drone," anyway?

The FAA has assembled a short-term task force to issue recommendations about these and other questions, but their decision is unlikely to be a crowd-pleaser. Recreational model aircraft pilots in particular worry that their special exemptions may be chipped away by this new initiative.

Then there's the question of whether this ad hoc process is even strictly legal under the FMRA and normal Administrative Procedure Act (APA) notice and comment rules. A court may very well end up overturning this half-baked registry scheme in short order.

The government failure on drone policy is not strictly limited to rule-making. The FAA's not-so-subtle doom-and-gloom fearmongering campaign against private drone use has not exactly helped the cultural climate, either. FAA officials are quick to publicize any reported incident involving a drone misdeed, and the FAA's website even maintains a running count of "close calls" between commercial airliners and private drones. But an independent analysis of this dataset by the Academy of Model Aeronautics finds that only around 3.5 percent of the 764 FAA records are true "close calls" of concern.

If this is a risk level that the FAA truly finds intolerable, then they should instead turn their attention to the real menace of the skies: birds! The agency's own report finds that the number of snowy owls that crashed into civilian aircraft last winter alone far exceeds the number of mere misses with drones. Yet for some reason, the concerned aviation regulators would rather harass techies than fluttering birdbrains.

Exaggerating risks and painting pictures of destruction may buy this sluggish agency more time to get around to doing its job, but it doesn't help an already-anxious public gain a realistic understanding of the true benefits and costs of private drone technology. If you didn't know any better, you might get the impression that the FAA was intentionally trying to stymie the drone industry through its dizzying campaign of confusion and antagonism. The reality is more benign: unprepared regulators attempted to apply precautionary-principle practices to a world that is becoming more accustomed to permissionless innovation by default. It would be nice if technocrats could embrace dynamism for its own sake, but failing that, we can at least hope that this episode with the FAA provides the commissars with another reason to get with the times: avoiding embarrassment.