Tonight's debate is also the first to come in the wake of widespread dissatisfaction from the campaigns about the ways the debates have been handled. 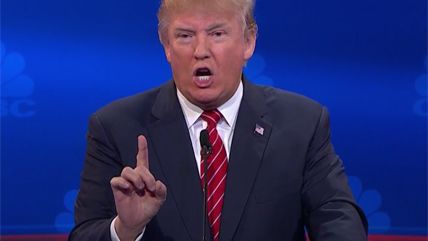 Tonight's GOP presidential debate will be different in a number of ways: For the first time since the contests began in August, Donald Trump isn't clearly in the lead; neurosurgeon Ben Carson has essentially pulled even with Trump over the last few weeks. The primetime debate 9 p.m. will feature just eight candidates instead of the usual 10; New Jersey Gov. Chris Christie and former Arkansas Gov. Mike Huckabee have been moved to the four-person undercard debate at 7 p.m. (As always, check in here as the staff of Reason will be livetweeting both events.)

Tonight's debate is also the first to come in the wake of widespread dissatisfaction from the campaigns about the ways the debates have been handled—in particular, the way that CNBC handled a debate about jobs and the economy that quickly turned into a chaotic free-for-all pitting the candidates against the moderators.

Fox Business Network, which is hosting tonight's event, has promised that tonight will be different, running ads declaring that "CNBC never asked the real questions, never covered real issues." The candidates themselves have insisted they want more substantive questions.

I generally think the folks at FBN do a good job, but given the ongoing rhetorical slugfest between Trump and Carson, neither of whom are exactly policy wonks, and the brutal Florida Mano a mano between Marco Rubio and Jeb Bush, who once again has oddly telegraphed his intentions to attack Rubio, it may be hard to keep the candidates on track, regardless of the questions asked.

But there's always hope. With that in mind, here are five substantive policy questions that various candidates should answer at tonight's debate:

1) Ben Carson, at times you've said that you want to abolish Medicare and replace it with some sort of system of private accounts. At other times, you've suggested you want to make Medicare voluntary. It's one thing to say Medicare is unsustainable in its current form. But the details of the plan you say you support aren't at all clear to anyone who knows how the program works. Can you explain what it is you support, and what exactly it will mean for individual Americans today and a decade from now? In addition, how would you overcome political opposition to even slight changes to Medicare; please do not say that people will love it when they understand it—try to explain it to them now.

2) Donald Trump, you've criticized Ben Carson for pushing, in your words, to "get rid of Medicare." You say that would be a "horrible" idea, and that Medicare works fine; the only real problem with the program is getting rid of waste, fraud, and abuse. Waste, fraud and abuse are huge problems for Medicare—accounting for about 10 percent of the program's expenditures in many years. But administrations on both sides of the aisle attempted to reduce waste, fraud, and abuse in the program for years. They've tried criminal task forces and computer monitoring of charges, increased oversight of doctors, and more. These programs have had limited success at best, and tend to be unpopular when they clamp down on doctors' activities in the name of cost oversight. Please specifically describe your plan to reduce waste, fraud, and abuse in Medicare without saying that you would make deals with medical providers or put the best experts together in a room. Remember, the best experts on both sides of the aisle have been trying to solve this problem for years. So how would you go about it?

3) Ted Cruz, you have proposed a major tax reform that replaces the current graduated income tax with a flat 10 percent tax on business incomes, plus a 16 percent business transfer tax. Isn't your business tax essentially just a European style Value Added Tax—a VAT? Why does America need a VAT? And what about the deficit effects? Your plan would raise the deficit by $3.6 trillion under a traditional static economic model, and even under the rosiest assumptions of economic growth and dynamic scoring, your plan would still blow up the deficit by about $768 billion, according to the Tax Foundation. If you care about reducing debt and deficits, why are you proposing a tax reform that would make them worse?

4) Jeb Bush, one of the key ideas of your campaign is that America should achieve 4 percent annual economic growth. That's an incredibly ambitious goal—most experts would call it completely unrealistic, and there's little basis for it in history. It doesn't seem to have any basis in policy or economic reality, or even any particular plans. According to reports, the number came from a casual remark you made during a conference call. Why should anyone believe you when you say that the country's economy would grow that fast in a Jeb Bush administration? And isn't the fantasy of difficult-to-achieve economic growth just a convenient way to say you'd cut taxes without also raising the deficit or cutting spending?

5) Marco Rubio, you have sketched out a plan you say would repeal and replace Obamacare. Like Obamacare, however, your plan relies on a system of federal tax credits that help offset the price of health insurance for many Americans. Other critics of the law, including at least one of your rival presidential candidates, have labeled this plan "Obamacare lite," and warned that it would lead to many of the same problems as Obamacare, with the tax credit essentially recreating the individual mandate, and allowing the federal government to continue control over the market for health insurance and individual coverage decisions. Why go through the trouble of repealing Obamacare if you're going to replace it with a system that relies on many of the same features?