The billionaire candidate's hosting of SNL is a reminder of the show's long, weak (WEAK!) history of political satire. 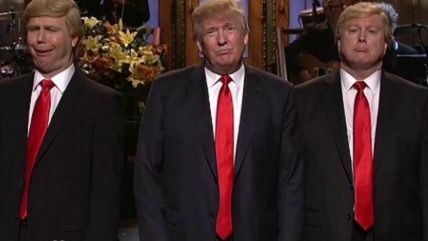 UPDATED 5:00 P.M. ET: However funny/not funny his episode might have been, Donald Trump's hosting of SNL delivered boffo ratings. Entertainment Weekly reports that he gave the show its biggest ratings since 2012, when Charles Barkley, the "round mound of rebound," and Kelly Clarkson appeared. The Donald's hosting increased the audience for the Hillary Clinton/Miley Cyrus episode by a whopping 47 percent, proving that while he may not be funny or coherent, he can bring the crowds.

Before Ben Carson's fabrications and exaggerations and Hillary Clinton's willingness to reschedule pot came to light, Donald Trump's appearance on Saturday Night Live promised to be THE big story this week.

Instead, his SNL gig, like his candidacy, is starting to feel a little bit like an after-thought. A shame, too, especially since Trump is often off-the-cuff funny in his campaign speeches, though always in a bullying, mean way (there's a place for that in American life, if not electoral politics)

So how did the Donald do in his second turn hosting SNL?

Judging from his opening monologue and his first skit—which is all I can take, folks—the show is a reminder that SNL has never really been great on political satire. Trump was flanked by two other Trumps, tossed out some weak (WEAK!) Rosie O'Donnell material and then promised a historically great show.

Part way through the first sketch—a sort of clip reel of Trump cliches about winning, the Apprentice, getting Mexico to pay for a border wall—that giant sucking sound wasn't the wages of NAFTA, it's SNL's inability to do meaningful political satire.

This isn't surprising. Folks such as Dana Carvey did a great George H.W. Bush not simply by exaggerating speech patterns but focusing in on 41's presumed fears ("no one-termer," Carvey's Bush prayed on the eve of the '92 election). Norm MacDonald's Bob Dole was as funny and mean as we all believed Bob Dole hisself to be. But by and large, SNL's poltical satire has been safer than milk and never straying from predictable, pat-on-the-back sensibilities. With Trump, it's safe to say at 11.55, that the milk is spoiled.

The show is far too self-satisfied and at the center of things to really be funny when it comes to politics. And the politicians who appear on it? Come on, we all know going in that they're not going to put themselves or their images at risk. Cutting-edge American mass culture moved on from SNL a long time ago, which is not necessarily a good thing or a bad thing. It's just a thing, and it means this episode will quickly vanish down the memory hole.