His Democratic opponent said letting patients use cannabis for symptom relief would produce a "lost generation" of adolescent potheads. 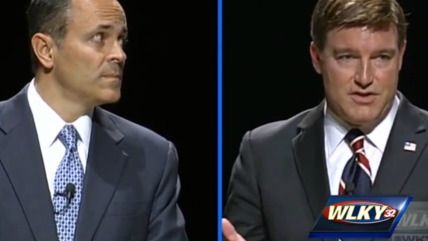 As Peter Suderman noted last night, Republican Matt Bevin beat Democrat Jack Conway in the race for governor of Kentucky by a comfortable nine-point margin. One interesting wrinkle in that contest was that Bevin said he would seek to legalize medical use of marijuana if he were elected, while Conway vehemently rejected the idea. During a televised debate on October 25, High Times reported last week, Bevin "told the crowd that there is enough 'unequivocal medical evidence' that cannabis has therapeutic benefit to support the development of a comprehensive medical marijuana program across the state and begin allowing the herb to 'be prescribed like any other prescription drug.'"

Conway disagreed, arguing that legalizing medical marijuana would boost recreational consumption by minors, creating a "lost generation" of adolescent potheads. "If we passed a law on medical marijuana," Conway said, "it would be easier to get on our streets. I understand what hurts kids, and I don't want to do anything that would have the potential to hurt our children." Bevin ridiculed the notion that a lack of marijuana "on the streets" is preventing teenagers from smoking pot, saying "the only people who can't get it are the people who abide by the law."

Mike Adams, who wrote the High Times post, was struck by the reversal of the roles that Democrats and Republicans usually play in the drug policy debate. "While it is not unheard of for a Republican to get behind the movement to legalize the leaf for medicinal purposes," he said, "it is somewhat unusual for a Democrat to take such a hammer-fisted position against it, especially during a time when the majority is embracing pro-pot political views." Conway, Kentucky's attorney general, also tried to use the drug issue against Rand Paul when they squared off in a 2010 Senate contest that Paul won by 12 points.

In Ohio, meanwhile, general legalization of marijuana lost big last night, but legislators who opposed that ballot measure, including House Speaker Cliff Rosenberg (R-Clarksville), say they are open to letting patients use cannabis for symptom relief. "After going through this process, myself and many of my colleagues realize there's tremendous support for medical marijuana and [that's] something we should have a bigger discussion about," Rep. Ryan Smith (R-Bidwell) told The Columbus Dispatch. "In talking to people, it was surprising to me how many said they support medical marijuana. We obviously want to help the parents with children that are ill and the elderly that are suffering. We just want to make sure the scientists tell us it will help and we write it in a responsible way."