Virtually no Division I programs pay for themselves, with many getting half their revenue from students and taxpayers. 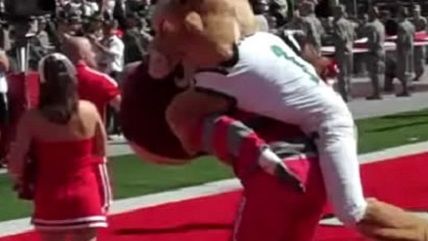 What went unmentioned: Like all but a handful (as in maybe a dozen), Division I sports schools massively subsidize their athletic departments out of general revenue. Schools will often claim that the subsidies go mostly to sports that don't generate much if any revenue but all analyses show that the vast, overwhelming majority of spending goes to funding football and basketball teams. In a bid to enter the "big time," schools routinely raise students fees, tuition, and other costs that are directed away from academic pursuits that one assumes are more central to higher education than an Elite Eight appearance or football bowl game.

According to USA Today, which updates its figures every for state-assisted schools (private ones, who are possibly even worse at this, don't have to share numbers under public records' requests), Wichita State subsidizes its athletic department's budget by 30 percent. Fully $7.5 million a year flows from student's pockets to coaches, vendors, and athletes.

Go here to find your own school. My own undergraduate school, Rutgers, uses $38,000,000 in student fees and general revenue to cover fully 50 percent of an athletic program that includes a football coach who was suspended for pressuring an adjunct to change the final grade of a start recruit. Anyone familiar with the Scarlet Knights' on-field performance won't be surprised to learn that the coach failed even at that.

I love watching college sports but they comprise one of the most-indefensible wastes of taxpayer dollars at state schools. And please, save me your debunked Flutie Effect arguments. There's no serious connection between having a good sports team and a better student body or academic reputation. It's a waste of dough, diverts away from academics in every possible way, and exploits student athletes, who generally would be better off playing in the semi-pro leagues that would inevitably crop up if college sports disappeared.

Related: How Much is a College Athlete Worth?