Senator holds back his desire to use profanity in describing the super-spendy bill. 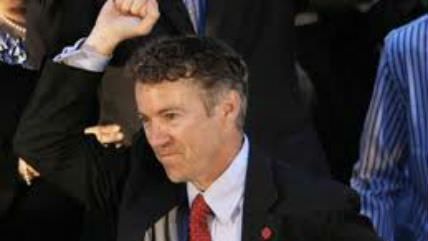 That crummy new debt limit deal that Peter Suderman skewered here earlier today? Presidential candidate and Kentucky Sen. Rand Paul doesn't like it either, and vows a repeat filibuster to try to kill it, as reported this afternoon in Washington Post:

"I will filibuster the new debt ceiling bill," Paul said at an event on the University of Colorado's Denver campus. "It is horrible, it's hard for me not to use profanity describing it."…

"We will filibuster until we talk about the debt ceiling, until we talk about proposals," Paul said [first time he tried this trick in 2011], after agonizing negotiations produced a similar punt of the hard votes. "We will actually vote in favor of raising the debt ceiling next week if we can, but it will be contingent on passing a balanced budget amendment to the Constitution."

That gambit didn't quite work out:

In the end, the balanced budget amendment did not pass. The debt limit compromise did, without Paul's vote. But Paul's ambition for this bill is to deny unanimous consent on passage of the House bill, forcing the Senate to work through the weekend, ahead of the Nov. 5 debt limit expiration deadline stated by the Treasury. That, according to Paul's team, would give Freedom Caucus members—already on record against the deal—time and space to mobilize opposition.

Paul of course made what could be seen as his first major national political bones filibustering about an issue with more bipartisan appeal, unilateral presidential power to kill citizens via drone. But his perhaps-on-the-upswing campaign will likely benefit from showing some anti-spending cojones for the GOP primary voters, at least those not hypnotized by Trump and Carson.