Democrats and Republicans Agree to a Budget Deal Compromise: More Spending on Everything! 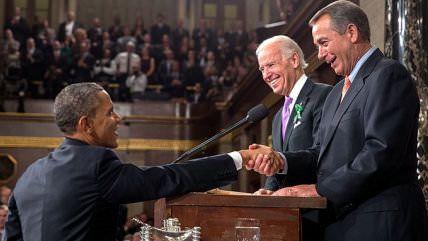 The good news about the budget deal? It's a budget deal. The bad news? Just about everything that's in it.

The two year agreement, which comes with just days until the nation hits the debt ceiling, would suspend the debt limit until March 2017 in exchange for lifting the spending caps imposed by sequestration in equal amounts for both domestic and defense spending, avoiding a government shutdown in the process. Overall, the deal would boost spending by $80 billion over the next two years.

That's the compromise: Republicans in Congress get more defense spending; Democrats, led by the White House, get more spending on domestic policy.

Republicans have been pushing to lift the sequester's spending caps on defense spending for a while, and Democrats have been arguing in return that it's only fair that non-defense spending get a boost too. As CBS News reports, one of the White House's priorities this round was "raising spending equally on both sides of the federal budget."

In theory, the spending hikes will eventually be offset with cuts almost a decade from now, in 2024 and 2025. Raise spending now, in other words, and pay for it by making cuts at the end of the 10-year budget window. There's almost no chance that these delayed cuts will ever go into effect. Republicans in Congress have agreed to raise spending and pay for it with imaginary spending cuts.

The scheme, which has been used before, barely rises to the level of a gimmick. It is more of a permissable way for everyone involved to agree to not cut spending as required by the sequester, without quite explicitly saying that this is what's going to happen.

In the very broadest sense, it's positive that there's some sort of budget deal in place. A drawn-out fight over the debt limit would have thrown the government into crisis mode, provoking a needless and perhaps extended standoff that likely would have resulted in little meaningful policy improvement. But this is a very low bar to have met.

A budget deal to raise the debt limit should ideally focus on finding ways to restrain or even (gasp!) reduce spending, with an eye toward heading off the need for debt limit showdowns in the future. The continual last-minute, last-ditch nature of these deals virtually ensures that they will be bad, and that those looking for budgetary reform and restraint will be in a bad negotiating position. Conservatives are, somewhat understandably, objecting to the deal's terms, which are indeed pretty bad. But the time to improve things is before the deadline nears and timer starts blinking red.

This is as much a process problem as a policy problem, and the good news is that Rep. Paul Ryan (R-Wisc.), who is now virtually certain to be the next Speaker of the House, says he'll work on fixing it. Via Politico:

"I think the process stinks," said Ryan, who is expected to be elected speaker on Thursday. The Wisconsin Republican added that he hadn't gone through the details of the agreement, which was released Monday night.

Whether or not Ryan will be able to successfully alter the process in a way that leads to productive results is an open question, but at least there's someone who is aware there's a problem and has indicated a desire to fix it.