Why Brute Force Will be Necessary to Avert "Climate Catastrophe" 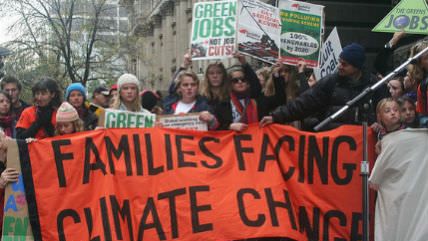 world will "voluntarily" commit to binding emission cuts to once and for all avert climate catastrophe. But the prelude to the talks last week in Bonn shows why solutions to this problem won't be that simple — or that "voluntary." The West and developing countries are profoundly at odds about who bears primary responsibility for causing global warming and who should therefore pay for shouldering it. Indeed, 130 developing countries led by India and China almost walked out in protest after it became clear that the draft Bonn action plan that is supposed to serve as the blueprint for the Paris negotiations had omitted their most important conditions about the "fairness and financing" of the final deal.

Soothing overtures by the Obama administration might have calmed matters for now. But that doesn't mean that the Sophie's Choice at the heart of mitigation efforts about which lives in which countries matter more has disappeared.

Regardless of the outcome in Paris, if the world ever gets serious about enforcing emission cuts, I note in my column in The Week this morning, things will get ugly:

When there is abundant wealth to solve a problem, moral accounting matters less. Whoever has the means will often step forward without caring too much about responsibility or returns. That clearly is not the case with global warming. The stakes are high for everyone so each side will vehemently assert the morality of its position. But the one most likely to prevail is not necessarily the one with superior claims, but superior force. Might, after all, makes right.