The Republican budget wonk wants to change the way the Speakership works. 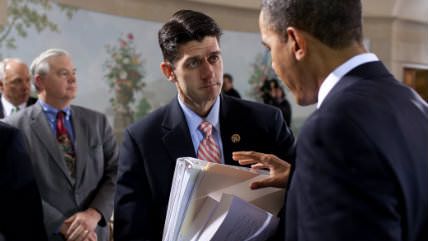 Over and over again, Paul Ryan has said that he doesn't want to be Speaker of the House. He said it when Speaker John Boehner announced that he would be retiring from the job, and again when Majority Leader Kevin McCarthy, Boehner's expected successor, made the surprise announcement that he would not be running for the job.

"While I am grateful for the encouragement I've received, I will not be a candidate," he said immediately after McCarthy's announcement. Thanks, but no thanks.

Late last night, Ryan seemed for the first time to be changing his mind. As Nick Gillespie noted earlier, Ryan announced that he would "gladly serve" as speaker—but only with a few conditions.

Ryan's first condition was that he wanted unanimous public support from the various House factions that might undermine his bid, especially from the House Freedom Caucus, which has consistently proven troublesome for GOP leadership. He also wants to eliminate the  "motion to vacate" procedure, a rarely used but powerful tactic that critics could use to threaten his speakership by putting it up for a vote. Finally, he wants to be exempt from some of the job's more taxing travel and time demands, so that he can still return home to his family on the weekends.

Essentially, Ryan wants a unified show of public support, the disarmament of his potential critics and enemies, and an agreement that he can do the job not just how he wants, but when he wants—almost entirely on his own terms.

What Ryan is really saying here is that he still does not want to be Speaker of the House—at least not in the sense that the job has long been understood for years.

But while he doesn't want the job in its current state, he will take the position if the job itself undergoes some significant changes.

One thing this particular list of demands does is give Ryan the opportunity for a graceful out. He's given the House until Friday to agree to his demands. Otherwise, he says, he'll be happy to stay in his current job as Chairman of the House Ways and Means Committee, a position he recently took and has long wanted.

But the other thing it does is give Ryan the chance to reshape and remake the Speakership, which for years has been about fundraising and vote-corralling. Under Boehner, it's been mostly a management job, about making sure that the trains run on time and that everyone is where they need to be.

Ryan would likely delegate many of those tasks and treat the Speakership rather differently. As Politico reports, he would focus more on communication, appearing on television more frequently, prioritizing Washington, D.C.-based events over the endless parade of travel-intensive fundraisers that have traditionally clogged the Speaker's schedule.

Ryan, the policy entrepreneur who spent years selling the skeptical House GOP on a budget and entitlement-reform plan that few would initially endorse, wants to make the Speakership a job that would play to his strengths and personal interests: policy development and salesmanship, communication and outreach.

He wants to take this management post and turn it into a true leadership position—one that's more about vision than implementation.

John Boehner's biggest flaw was that he had no vision for the GOP or for the House's role in the party, no agenda to pitch or pursue. He was an implementer with nothing to implement.

Ryan's bet is that he can avoid that fate, and remake the job—making what is widely described as the worst job in Washington, a high-profile gig that nobody wants, into a job that someone with talent and ambition might actually be willing to do.

Granted, this might not work out. There are plenty of obvious dangers here—that Ryan will be too compromised in his approach in order to placate dissenters or win votes, as he has sometimes been; that he will subsume his own ideas in order to serve some larger party-driven goal, as he sometimes did while campaigning as Mitt Romney's vice presidential pick; or that he will be quickly be overwhelmed and outshone by the eventual GOP nominee, or even president, who would easily rival Ryan's vision and agenda-setting power in the Republican party.

Essentially, Ryan could still be forced into an implementation job he very much doesn't want, leaving the GOP stuck with its current inability to govern itself or anything else, and tarnishing Ryan in the process.

But given Boehner's uninspiring track record in the job as it's currently understood, I think it may be worth giving it a shot.

Ryan has never wanted the job, which is itself a sign that Ryan isn't out to repeat the mistakes and failures of previous Speakers. But by listing his demands, Ryan has outlined the job he does want.