The ripple effects of a post-Ferguson reform 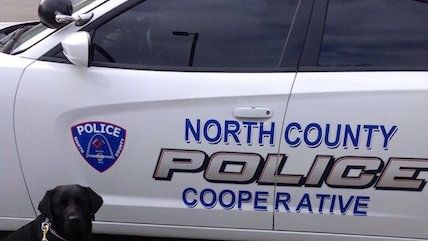 Starting next year, towns in St. Louis County will not be allowed to draw more than 12.5 percent of their revenue from traffic fines. (The previous cap was 30 percent.) Last week I noted that one tiny town, St. Ann, has responded by laying off 10 cops and rethinking the value of a notorious speed trap. Now comes word that another mini-municipality plans to eliminate its police force altogether.

Facing the loss of the traffic fines and court fees it relied upon for funding, the town of Charlack, MO, is dissolving its tiny police force and contracting out from a new player on the law enforcement scene in the St. Louis area. The North County Police Cooperative (NCPC), an outgrowth of neighboring Vinita Park's own police force, will take over responsibility for the handful of streets that make up tiny Charlack….

Charlack exemplifies the exploitative standard operating procedure common among many of St. Louis County's odd-shaped municipalities. It sits astride a couple thousand valuable feet of interstate highway. That strip of asphalt was Charlack's money tree. Prior to this summer's reforms, the tiny hamlet of 1,300 people was getting nearly 29 percent of its total operating revenue from municipal court fines and fees.

Another town in the area, Wellston, recently opted to eliminate its police department and join the NCPC. (Indeed, that is basically how the NCPC got started.) In that case, the new law wasn't the impetus—Wellston got only 12.2 percent of its money from fines and fees. It just couldn't afford its force. As Pyke writes, Wellston "had 17 patrol officers and 23 total staff, or one for every hundred residents."

In the wake of the Ferguson riots, the technocrats' favorite fix for the St. Louis region has been a mass consolidation of city and county governments. Instead, the state made a simple change to the incentives those little towns face, and they're adjusting in ways that could cut back on those local shakedowns without eliminating the advantages of a decentralized system. It won't end all the area's problems; but even if it just makes Missouri marginally less dystopian, it's a step in the right direction.

Bonus link: Elinor Ostrom argued that highly centralized governments, such as those that result from city/county mergers, are inferior to "polycentric" systems, in which political units of varying size can cooperate but act independently, without a clear hierarchy. I applied her ideas to the post-Ferguson debate in this article.