How Did the Also-Rans Do? 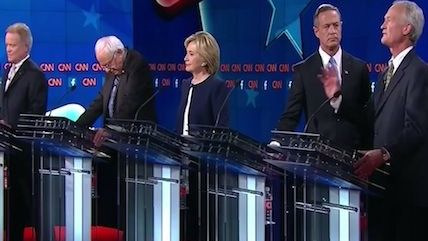 The Clinton/Sanders faceoff was the main show tonight, but there were three more candidates onscreen as well. How did they fare?

Jim Webb: A lot of viewers are going to come away from this thinking of Webb as "that guy who wouldn't shut up about how he wanted more time to talk." Still, his ideas on several topics—guns, energy, foreign policy—were distinctly different from the opinions of the other four candidates onstage, and they're going to appeal to some Democrats, even if they're not the dominant views in his party. (Surely there must be a few gun-owning, coal-mining West Virginia veterans out there who caught a part of the program tonight.) So perhaps he'll get a small boost from the exposure: not a breakout moment or anything like that, but enough to poll a bit better than the 1% or less that he's been getting thus far.

Lincoln Chafee: Like Webb, Chafee had some opinions that weren't shared by others onstage—he was the only candidate to denounce the drone war, for example, and the only one to forthrightly say he wouldn't jail Edward Snowden. Unlike Webb, he was completely inarticulate, and I say that as someone who agrees with him about the drone war and Edward Snowden. His low point came when he was challenged on his 1999 vote to repeal Glass-Steagall:

This was especially galling considering that Chafee has been calling out Clinton—correctly!—for her vote in favor of the Iraq war. If that's your argument on your big issue, you don't really have any business saying "I think we all get some takeovers" later on. Chafee is not ready for prime time, and I don't think he ever will be.

Martin O'Malley: The most extraneous candidate on the stage, O'Malley basically wavered between coming across as Clinton Lite and coming across as Sanders Lite. He didn't do as poorly as Chafee in terms of his basic competence as a debater, but he didn't distinguish himself in any substantial way either. Even on immigration, the one issue where he can credibly claim to be bolder than the others, he wound up in Clinton's shadow. If O'Malley is actually running for a job in the Clinton administration, I suppose there may be a point to his performance; otherwise, this feels like a campaign without a purpose.