Like the president, the presumptive Democratic nominee assumes we can identify mass shooters before they strike. 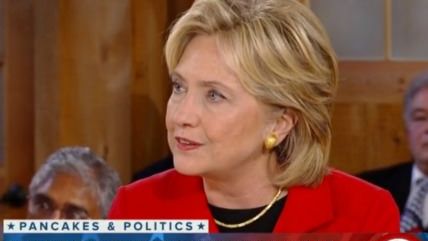 After a gunman murdered nine people at a community college in Oregon last week, President Obama said the solution to such violence is obvious. "It cannot be this easy for somebody who wants to inflict harm on other people to get his or her hands on a gun," he declared.

The problem is that we generally do not know a gun buyer "wants to inflict harm on other people" until he does it. That reality shows the folly of relying on background checks or psychiatric intervention to prevent mass shootings.

Obama did not mention any specific policy during his 13-minute speech. But his talk of making it harder for murderers to obtain weapons through legislation supported by "the majority of Americans" suggested he had in a mind a law requiring background checks for private gun transfers as well as sales by federally licensed dealers.

Former Secretary of State Hillary Clinton, the presumptive Democratic presidential nominee, embraced that solution this week, saying, "I'll try in every way I can to get those guns out of the hands of people who shouldn't have them." If Congress does not act, Clinton said, she will try to broaden the background check requirement through an executive order.

Clinton did not seem to notice that requiring background checks for private gun transfers makes no sense as a response to the Oregon massacre, since the weapons used in that attack were legally purchased from a licensed dealer by the killer and a relative. That means the killer passed background checks, apparently because he did not have a disqualifying criminal or psychiatric record, which is typically the case with mass shooters.

Although it should be obvious that a murderer who passed a background check could not have been stopped by a background check, such simple logic seems to elude advocates of "common-sense gun safety laws." Even in the few mass shootings where background checks missed information that arguably would have blocked gun purchases, the issue was the adequacy of the screening process, not the killer's ability to avoid it.

The obvious response is to broaden the criteria for prohibiting people from owning guns. But the existing restrictions already cover millions of people—including cannabis consumers, illegal immigrants, nonviolent felons, and the targets of involuntary psychiatric treatment—who would never have used a gun to harm anyone.

It is striking how casually the government strips people of the basic human right to armed self-defense. Expanding the disqualifying criteria—to include, say, people with certain psychiatric diagnoses or people whose disruptive behavior gets them fired from jobs or kicked out of school—would only compound this unconstitutional injustice.

Clinton says we should "do everything we can to make sure the irresponsible and the criminal and the mentally ill don't get guns." That formulation represents a dramatic expansion of current restrictions, which generally do not cover people who commit misdemeanors or the "mentally ill" (a category that potentially includes half the population), let alone people whom Hillary Clinton considers "irresponsible."

There are similar problems with trying to stop mass shootings by expanding the use of coercive psychiatric treatment (which is in turn grounds for permanently depriving someone of his Second Amendment rights). While mass shooters tend to share certain traits, including isolation, anger, and depression, many other people with these traits never hurt anyone.

"What seems telling about the killers," The New York Times notes, "is not how much they have in common but how much they look and seem like so many others who do not inflict harm." As Duke University psychiatrist Jeffrey Swanson put it, "You can't go out and round up all the alienated angry young men."

The difficulty of identifying would-be mass murderers before they strike is the fatal flaw in the simple-minded, emotionally driven ideas that politicians reflexively propose after crimes like last week's attack in Oregon. "We've got to do something about this," Clinton says. Apparently anything will do.