Oregon Killer's Father Says No One Should Own So Many Guns

How would the government enforce a limit on the number of firearms people may possess? 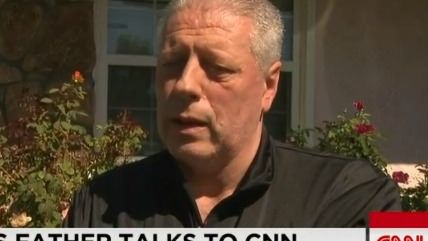 The father of the man who murdered nine people at a community college in Oregon last week, who had not seen his son in two years, was dismayed to learn that he owned 14 guns. Police say the killer brought six guns—a rifle and five handguns—with him to Umpqua Community College in Roseburg and left another eight at home. All 14 were legally purchased by the shooter or his relatives. "How was he able to compile that kind of arsenal?" the killer's father, Ian Mercer, asked in an interview with CNN yesterday. Calling for stricter gun control, Mercer argued that the mass shooting "would not have happened" if his son did not own so many firearms.

That claim is debatable, to say the least. The perpetrator of the deadliest school shooting in U.S. history, at Virginia Tech in 2007, managed to kill 32 people with just two handguns, and other mass shooters have killed more than nine people with one or two weapons. Furthermore, the policy implications of Mercer's argument are unclear. Enforcing a limit on the total number of guns that any one person could own would require more than limiting the number that could be purchased in a given transaction or a given month (as California, where Mercer lives, does for handguns). It would require registering all 300 million or so guns in the country and keeping track of all transfers—not to mention confiscating guns from people who exceed the limit.

That's a pretty tall order, and it is hard to see how it could be reconciled with the Second Amendment. The gun restrictions that the Supreme Court so far has indicated are constitutional have to do with categories of people (such as "felons and the mentally ill"), categories of firearms ("dangerous and unusual weapons"), and carrying guns in "sensitive places such as schools and government buildings." The Court has said nothing, as far as I know, about limits on the number of firearms a person may legally possess, which would require a highly invasive regulatory system that would raise issues under the Fourth and Fifth amendments as well as the Second.