How the Democratic presidential candidate kept an email controversy alive 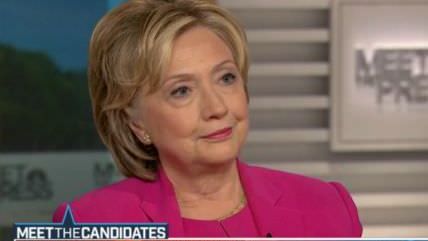 In a Meet the Press interview on Sunday, Hillary Clinton said she has tried to "be as transparent as possible" in response to questions about her use of a private email server as secretary of state. A timeline of her efforts so far suggests she needs to try a little harder.

March 3: The New York Times reports that Clinton, the presumptive Democratic presidential nominee, used a private server for all of her electronic correspondence as secretary of state, thereby evading automatic archiving. A spokesman for Clinton says she complied with "the letter and spirit of the rules" governing State Department communications.

March 8: A spokesman for Bill Clinton says he has used email only twice in his life, both times when he was president.

March 10: Clinton reports that she erased about 32,000 email messages she deemed private, including "personal communications from my husband and me," and gave the State Department about 30,000 work-related messages. She says she "fully complied with every rule," "went above and beyond what I was requested to do," and "did not email any classified material to anyone."

March 31: CNN reports that Clinton, who said she used a private email address because "I thought it would be easier to carry just one device for my work and for my personal emails instead of two," carried two devices, a Blackberry and an iPad, that she used for email as secretary of state.

April 21: Clinton mentions that she has since started carrying two additional devices, an iPhone and a mini iPad.

July 24: The inspectors general of the State Department and the intelligence community report that Clinton's email included classified material that should never have been stored on a private server.

August 18: Pressed by Fox News correspondent Ed Henry about whether she had "wiped" her email server, Clinton replies, "What? With a cloth or something?"

August 20: A federal judge hearing a Freedom of Information Act case concerning Clinton's email says, "We wouldn't be here if the employee had followed government policy."

August 26: Clinton concedes using a private email server "clearly wasn't the best choice," adding, "I take responsibility for that decision." Revising her earlier claim about sensitive material in her email, she says she is confident an FBI investigation will show "I never sent, nor received, any email that was marked classified."

September 4: Asked if she owes Americans an apology for the email controversy, Clinton tells NBC News, "I am sorry that this has been confusing to people and has raised a lot of questions."

September 7: Clinton tells the Associated Press there is no reason for her to apologize about her private email address because "what I did was allowed."

September 8: Clinton finally uses the m-word to describe her private email server, telling ABC News, "That was a mistake. I'm sorry about that. I take responsibility."

September 25: The State Department says it has email correspondence between Clinton at her private address and David Petraeus, then commander of the U.S. Central Command, beginning January 10, 2009, more than two months before Clinton says she started using that address.

September 27: Asked about the discrepancy on Meet the Press, Clinton has no explanation. "There was a transition period," she says. "You know, I wasn't that focused on my email."

During that same interview, Clinton blamed the email controversy on a "drip, drip, drip" of "charges and claims" from Republicans. "There's only so much that I can control," she said. There's a lesson that Clinton, whose controlling tendencies gave birth to this story and kept it alive, really should take to heart.