Mass. Cop Fired on Own Cruiser to Cover Up Crash, Causing Lock Down in Local Town

Now charged, will be fired. 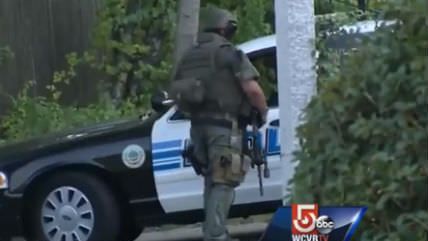 Last Wednesday, Bryan Johnson, a police officer in Millis hired in June, crashed his police vehicle, then allegedly fired several shots at it and reported he had been shot at, causing him to crash.

The town, located in Massachusetts, a kind of birthplace of the contemporary police lockdown, went on lockdown for several hours after the "shooting," with police asking residents to remain home while SWAT teams, K9 units, and even a police helicopter swept through town in search of a gunman. Millis doesn't appear to do this when "regular people" are shot at.

Eventually, investigators determined the only shots fired at Johnson's car were from Johnson's firearm. He will be fired before he was scheduled to begin police academy training—Johnson was part-time with the police department before being hired as a full-time officer in June. He is also being charged on multiple counts, including misleading investigators and unlawful discharge of a firearm.

Johnson reportedly admitted to blacking out and then fabricating the story. He was given a psychiatric evaluation Friday. Johnson still has some qualified support in the department. Via WCVB:

Nevertheless Dwyer, who was in charge of the department as of last week, insists Johnson would be "prosecuted to the fullest extent of the law."