The Former Prosecutor Who Consistently Gets Criminal Justice Reform Wrong

Former prosecutor Bill Otis has been mistaken over and over again when advising legislators against reducing drug sentences. 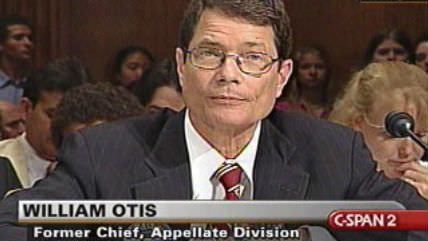 No one expects our elected representatives to be experts in every area of public policy. At the same time, we have every right to expect that our representatives will consult policy analysts and experts who know what they're talking about, not someone who has been proven wrong time and time again. In the world of criminal justice, that someone is former federal prosecutor and Georgetown Law adjunct William Otis.

Over the past two decades, Bill Otis has become the Paul Ehrlich of criminal sentencing reform. He is always certain in his convictions and nearly always wrong. Moreover, like Ehrlich, Otis likes to scare the public with predictions of certain and impending doom, and he is immune to feelings of embarrassment or humiliation despite being proven spectacularly wrong over and over again.

For those too young to remember, Paul Ehrlich achieved fame in 1968 when he argued in his bestselling book, The Population Bomb, "The battle to feed all of humanity is over. In the 1970s hundreds of millions of people will starve to death in spite of any crash programs embarked upon now. At this late date nothing can prevent a substantial increase in the world death rate." Three years later, Ehrlich predicted England would not exist in 1980. Amazingly, he continues such talk today.

Bill Otis is also prone to predicting misery. But whereas Ehrlich saw overpopulation as the culprit, Otis thinks shortening sentences for nonviolent drug offenders will be America's undoing. Indeed, every time Congress or the U.S. Sentencing Commission has considered even mild sentence reductions over the past two decades, Otis has gone full Chicken Little. He has been wrong every time.

Otis helpfully summarized his views in 2014, telling a Federalist Society audience, "Two facts about crime and sentencing dwarf everything else we've learned for the last 50 years: When we have more prison, we have less crime. And when we have less prison, we have more crime." The best thing about Otis's thesis is that it is easily tested, and so easily debunked. Consider the following real-world evidence:

The nationwide drop in crime and prison crowding should be celebrated. Less violent crime means fewer murder victims, fewer robbery victims, and fewer assault victims. Smaller prison populations means savings for taxpayers and more money to spend on what actually does reduce crime—community policing and supervision practices like "short, swift, and certain." None of these gratifying results would have been possible if Otis's theory were correct—or if any lawmakers outside the Beltway had heard of Otis and took his views seriously. While Otis has been consistently wrong, thankfully lawmakers have ignored him.

With such a misguided worldview, it is little surprise that Otis's more specific predictions have turned out so wrong. A few specifics will make the point:

The Commission' s proposed amendment, however, decreases sentences to the point that the incentive for a low-level player to help catch the bigger fish is all but decimated, particularly in light of the risks to which a cooperating defendant is exposed.

In other words, the amendment is likely to produce the twin evils of less information being furnished to investigators and fewer substantial assistance motions for those who most deserve them…

Be clear this is not an amendment that will reduce drugs or drug use. It will only reduce the penalties for these things, and thus create a perverse system of incentives that stands on its head the guidelines' central purpose of protecting the public.

Congress's attempt to block the Commission's amendment failed and all of Mr. Otis's predictions were proven wrong.

Otis was wrong about the amendment's impact on cooperation. It did not decimate cooperation rates. 95.8 percent of all crack offenders accepted plea agreements in 2013, a rate that is nearly identical to the 96.2 percent that took deals in 2002. Further, the government filed motions to reward cooperators in 26.2 percent of all crack cocaine cases in 2013, a rate more than double the rate of these motions filed by the government in all cases that year (12.1 percent)).

Otis was also wrong in his claim that the amendment would not "reduce drugs or drug use." It is not clear how the amendment could have "reduced drugs," but he was wrong with respect to its impact on drug use. According to Monitoring the Future/Univ. of Michigan, teen use of crack cocaine fell by nearly 50 percent between 2002 and 2014.

Finally, with regard to his claim that the sentencing cap amendment would undermine the guidelines' purpose of protecting the public, Otis was clearly wrong. From 2002 to 2013, the nation's violent crime rate dropped a remarkable 25.6 percent. Rates of robbery, manslaughter, assault, and rape also significantly decreased.

Eight years later, Otis got it wrong again. In 2010, Congress passed the Fair Sentencing Act (FSA), which reduced the indefensible power-crack cocaine sentencing disparity from 100:1 to 18:1, was approved unanimously by the U.S. Senate and by voice vote in the U.S. House. The new ratio is now closer to the 20:1 ratio originally proposed by the Reagan Administration. Prominent conservatives inside and out of government spoke out in favor of the FSA.

Committed to his prison-is-always-the-answer ideology, Otis derided the FSA, saying it should be called the "Crack Dealers Relief Act." When the U.S. Sentencing Commission lowered the crack guideline and made it retroactive in accord with the FSA, Otis predicted it would lead to an increase in crime. From The New York Times:

Not everyone is pleased with the change. William Otis, a former federal prosecutor and special White House counsel under the first President George Bush, said that since recidivism is predictable, the releases would inevitably lead to more crime.

On his blog, Otis cranked up the fear machine. He predicted "misery" when "thousands of crack dealers" would be "put back on the street prematurely" to terrorize their communities.

Fortunately for those of us concerned about public safety, Otis was wrong again—amazingly wrong. Since passage of the FSA, the crime rate, the prison population, and crack usage are all down! It bears repeating. Otis said the changes would cause "misery" and "inevitably lead to more crime." Instead, while thousands of offenders have received fairer sentences, the crime rate has fallen, crack use is down, and taxpayers have saved millions from being wasted on unnecessary prison costs.

Otis is impervious to facts and evidence. He will quote Professor Steven Levitt's finding that greater reliance on incarceration helped reduce crime in the 1990s and then ignore Levitt's later conclusion that the country has gone too far and that prisons should reduce their populations by one-third. Otis will say, as he does in National Review, that the movement for sentencing reform "is strictly interest-group—and billionaire—driven, inside-the-Beltway," which would be fine if you did not already know that the reform movement began in the states and is being promoted in Washington, DC by insiders like Senators Ted Cruz (R-Tx.), Rand Paul (R-Ky.), and Mike Lee (R-Utah).

Otis's amazing record of wrongness would be interesting and perhaps even funny if he, like fellow fear-peddler Paul Ehrlich, were exiled from the world of rational public policy making. But media reports have suggested that some members of Congress actually listen to Otis. If that's true, then we really do have a good reason to be scared.