He started as a governor running on his accomplishments. He turned into a politician who couldn't describe what he'd do. 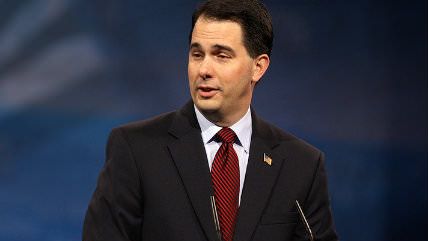 Scott Walker, who just months ago was viewed as a top-tier contender for the GOP presidential nomination, is tanking in the polls.

The latest release from Public Policy Polling finds the Wisconsin governor polling at just 5 percent, tied for eighth place with Mike Huckabee. In Iowa, where Walker has focused the bulk of his campaign strategy and resources, a Monmouth University poll this week put Walker in fifth place, with 7 percent support, behind Donald Trump, Ben Carson, Carly Fiorina, and Ted Cruz.

Other national polls tell the same story. At the end of July, Walker briefly rose to second place amongst GOP candidates nationally, edging out Jeb Bush with 13.7 percent support, according to the RealClearPolitics presidential poll average. Walker is now in sixth place overall, with an average showing of 6.3 percent.

Why is Scott Walker's campaign faring so poorly?

One reason is Donald Trump, whose hip-shot populism has arguably done more damage to Walker's campaign than to any other GOP candidate.

But the other reason is Scott Walker.

Walker is running a pandering, cringe-worthy campaign marked by a consistent inability to clearly articulate, and stick to, his own positions.

After drumming up a ton of attention early in the year by giving passionate speeches about his record as governor of Wisconsin, he's been unable to sustain his early momentum. Instead, he's allowed himself to be drawn into a series of news cycle traps, and then handled the aftermath poorly, often by denying that he'd made any misstep in the first place.

Most recently, for example, Walker seemed to suggest that he was open to the possibility of a building a wall along the Canadian border in order to stop illegal immigration. He responded by saying that he'd been asked this question by people in New Hampshire, that the people asking the questions had "very legitimate concerns," and that the idea of building a wall would be "a legitimate issue for us to look at."

It's not exactly a "damn right we should build a wall!" But Walker's response clearly takes the idea seriously, and pointedly does not rule it out.

Yesterday, however, he claimed that the talk about it was "just a joke" and that he's "never talked about a wall at the north."

This is the Walker campaign playbook: Say something awkward or ill-advised, watch as the media swarms to cover it, then insist that there was never anything to see.

Yes, as The Daily Beast's Betsy Woodruff notes in a smart piece today, Walker appears to have a longstanding verbal tic in which he initially responds with a "yeah" to questions he does not mean to answer in the affirmative.

But watch the exchange with Hunt again. Walker, asked for confirmation of his initial response, responds a second time in the affirmative, nodding along as he does. It's hard to watch the back and forth and not get the distinct impression that Walker is in favor of ending birthright citizenship.

A few days later, when asked about it again, he shifted course by explicitly declining to take a position. "I'm not taking a position on it one way or the other," he told CNBC's John Harwood. Yet just a few more days after that, he did take a position, telling ABC's George Stephanopoulos that was definitely not in favor of ending birthright citizenship.

That's three different positions in the space of week—and yet when asked about the shifts, a campaign spokes erson complained about efforts to "mischaracterize" his position.

It is difficult, if not impossible, to correctly characterize a candidate's position on an issue when the candidate himself cannot seem to state it with any clarity.

This sort of flip-flopping, what might generously be called policy confusion, has dogged Walker's campaign essentially from the moment it began. Back in March, Walker, in what was obviously a sop to Iowa voters, reversed his previously clear opposition to federal ethanol subsidies.

A week later, when asked about the change, he denied that he had flip flopped on the issue. Since then, his position appears to have shifted again, with Walker suggesting to The Washington Examiner's Timothy Carney that he supports ending the ethanol mandate after two years.

Even when Walker holds what looks to be a relatively clear position, he has a difficult time describing it. After his campaign released an imperfect but detailed-enough Obamacare replacement plan last month, he was asked about whether he can justify its redistributive effects. Politically speaking, the best answer to this entirely predictable question would have been that Walker's plan is designed first and foremost to help the broad middle class.

Walker started his run as a candidate with a record of accomplishment who would get things done in Washington. He quickly turned into a candidate who couldn't even describe what it is he'd do.

And in the process, he lost what made his campaign take off in the first place. Walker rose to prominence earlier this year not only on the strength of his governing record, but on his ability to clearly and powerfully articulate that record and why it mattered. The natural extension of this, as a candidate, would have been to take the issues that he was already known for at the state level—public sector union power, budget deficits, state spending and taxes—and develop them into a coherent national agenda.

Instead, Walker has pandered to Iowa voters, prioritizing issues like immigration and the nuclear deal with Iran that were never core to his appeal, and let his campaign be drawn into the day-to-day absurdities of the Trump circus.

He has not only shifted his policy positions, he has shifted his character—and in doing so, he has undermined his essential appeal.

Can he get his campaign back on track? He's certainly going to try: As Bloomberg Politics reports, Walker is out to reboot his campaign by, among other things, attacking rival Jeb Bush for being insufficiently opposed to the Iran deal, despite previously suggesting that he wouldn't go on the offensive against his Republican rivals. In other words, he's going to shift his character again.