Awaited Police Crackdown on Times Square Performers About to Begin? 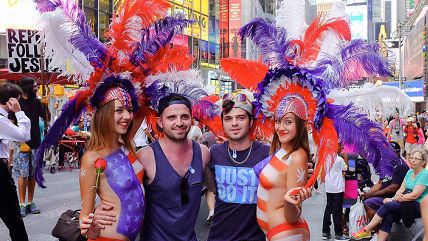 Earlier this year, New York City Mayor Bill de Blasio (D) got a budget passed that included funding for 1,300 new police officers. While de Blasio did his rhetorical co-opting thing by insisting "black lives matter" when that slogan was trending, he's remained steadfastly in favor of the kind of aggressive, petty law enforcement that lead to interactions that end with otherwise peacable, unarmed people being killed by cops. The policy goal of hiring 1,300 new officers, rather than shifting currently employed officers in a way that prioritizes what's important, fits into that ideology of total policing.

Is New York City starting to get a sense of what the new police officers will be used for? The New York Police Department (NYPD) is preparing to deploy a squad of officers to deal with "quality of life" issues in Times Square, like the topless women, costumed characters, and other First Amendment street entrepreneurs soliciting donations in exchange for photos or whatever else. Police Commissioner Bill Bratton insists the department is looking for volunteers, but unless the NYPD has a cache of officers sitting around doing nothing (certainly very possible in government employment, though not something the government would admit) those volunteers will have to be replaced by other cops. So you get a sense of what New York City wants to prioritize with 1,300 new officers—it's not violent, or even property, crime but non-violent, consensual behavior some New Yorkers demand the government stop other New Yorkers from participating in. Almost like New York City is a giant prison.

Bratton wanted to get Disney and Marvel, who own the rights to many of the costumed characters represented on Times Square, on board with the crack down but they don't appear to want to get involved. The New York Daily News reports:

"They want no part of it," Police Commissioner Bill Bratton said on the John Gambling radio show. "We've encouraged Walt Disney, 'Put your characters out on Broadway free of charge so people don't have to worry about their kids being groped,'" he said. "We said to them, effectively, 'Since you control the rights of them, put them out in front of the Disney Theater.' They want no part of it."

For what it's worth, when I worked as Shrek in Times Square almost 10 years ago, my employer insisted someone came down from the Disney office in Times Square and told him it was ok for him to operate there. I highly doubted the story, but certainly given the contemporary copyright climate, it would be very difficult for the costumed characters to operate in Times Square if the rights owners put up a fight.

Disney, at least, may not be against cracking down on the costumed characters insomuch as it's against getting actively involved. A spokesperson for Disney told the Daily News the company's "been working for years in trying to get legislation that would require registration and the identification of these costumed characters." (I thought registering costumed characters was a Marvel thing?) The spokesperson says Disney considers it "a public safety issue." Were it not for meddling residents and companies, surely New York City would be an anarchist wasteland, where free people put on spectacles to attract tourists and their money. I think that's what Escape From New York was about. The horror.

Related: The New York Post has a story from a woman who decided to be a topless street performer for a day and write about it, and found the money was pretty good and so was the work environment. She did see someone her manager identified as an undercover cop complaining about the women being objectified, but he appeared to be the only one.