The presence of ingredients such as pea protein and beta-carotene violates federal mayonnaise law. 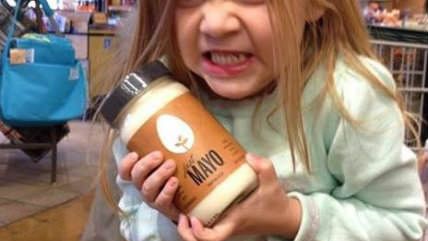 In a warning letter sent to Hampton Creek earlier this month, the FDA noted several "significant violations" of federal regulations. The first complaint is that Hampton Creek uses the term "cholesterol free" on the label of its "Just Mayo" products.

Nevermind that Just Mayo is, indeed, a cholesterol-free food. While the FDA allows foods with up to two milligrams of cholesterol per serving to bear claims that they're free of cholesterol, this statement is forbidden on products "customarily consumed" in small amounts if they a) have more than 13 grams of fat per 50 grams and b) fail to "disclose the level of total fat in a serving of the product in immediate proximity to the cholesterol claim."

The FDA also claims Hampton Creek's Just Mayo and Just Mayo Siracha are "misbranded" because they do not meet federal requirements for calling something mayonnaise. Under federal law, only foods 1) containing at least 65 percent vegetable oil, 2)vinegar and/or lemon juice, and 3) some sort of egg-yolk product may be labeled mayonnaise. It can also contain preservatives, salt, sweeteners, spices, flavoring, and monosodium glutamate, but only "provided it does not impart to the mayonnaise a color simulating the color imparted by egg yolk." Any other ingredients are forbidden.

Want to sell mayonnaise with an egg substitute, lime juice, or slightly less vegetable oil? Too bad—the FDA does not think the market can handle such ingredient chaos.

Contra the FDA rules, Hampton Creek's mayo doesn't contain egg yolks (or any other animal-based ingredients). It does, however, contain several ingredients that may up the nutrient factor compared to typical mayo, such as pea protein and beta-carotene. These ingredients are in violation of federal mayonnaise law.

BL: Can an egg-less product be mayonnaise? If Just Mayo is mayonnaise, then shouldn't Miracle Whip, which has been forced to call itself "salad dressing" for generations because it didn't fit the FDA definition of mayonnaise, also have the right to use the "mayonnaise" tag? To me, this is one key narrative that's been missing in discussions of this story so far.

MS: This is tricky because I do think it's important to have some standards for what products can be called to protect against outright fraud and adulteration. And again, that's why intent matters. I am inclined to agree that if Just Mayo is allowed to be called "mayonnaise" under FDA law then so should Miracle Whip. But the main issue here is… an outdated definition and in the 21st century, there is really no reason mayonnaise has to include eggs.

BL: What do you think the specific guiding principle should be when it comes to labeling issues like these? I've always argued that "the federal government should '[o]pen up all food labels to any and all statements that aren't demonstrably false.'" Is that a good rule? If not, what would you suggest in its place?

MS: No it's not, because labels can still be deceptive even when they are not false. That's why our consumer protection laws do not allow "false or deceptive" marketing, recognizing that these can be, and often are, mutually exclusive ways to fool consumers. For example, FDA does not allow junk foods to be fortified with vitamins (i.e., the "jelly bean rule") because it would deceive the consumer into thinking the product is healthy when it isn't. As to the mayo wars, the guiding principal to me is that intent matters. The Just Mayo product does not intend to deceive anyone, contrary to Unilever's desperate argument.

Hampton Creek—which also makes egg-free cookie dough and includes Bill Gates among its major investors—has come under FDA scrutiny before, resulting in it being forced to change "lemon juice" to "lemon juice concentrate" on labels. The company was also sued by Unilever, producer of Hellmann's mayo, in 2014; Unilever dropped the suit in December so Hampton Creek could address the labeling issue directly with the FDA. As Scott Shackford noted at the time, "Unilever ended up having to change the descriptions of ingredients in some of its own products on its website from mayonnaise to mayonnaise dressing because they weren't even in compliance with the very regulations they were trying to use to punish Hampton Creek."

The FDA's complaint also faulted Hampton Creek for stating on its website:

Your Heart Matters. When your heart is healthy, well, we're happy. You'll never find cholesterol in our products.

"Adjacent to this statement is a heart shaped symbol with a smiling face," the FDA notes. "Together these statements and heart symbol are an implied health claim that these products can reduce the risk of heart disease due to the absence of cholesterol," in violation of the FDA rules about implying such a thing.

Hampton Creek CEO Josh Tetrick told Quartz that he "had a really good call with the FDA" Tuesday and looks forward to "a productive conversation" through which they can "find some common ground" and keep using the name "Just Mayo."