But it still won't drop charges against activists arrested for distributing jury nullification pamphlets near a courthouse. 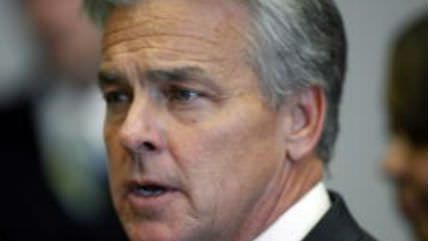 Yesterday a federal judge in Denver issued a preliminary injunction protecting the First Amendment rights of activists who want to distribute jury nullification pamphlets outside the Lindsey-Flanigan Courthouse. Two activists, Mark Iannicelli and Eric Brandt, did just that last month and as a result were each charged with seven counts of jury tampering, a felony punishable by one to three years in prison. Last week their lawyer, David Lane, filed a federal lawsuit on behalf of two other activists and the Fully Informed Jury Association (FIJA), asking for an order barring such unconstitutional harassment. The injunction issued by U.S. District Judge William J. Martinez applies not only to arrests by the city but to enforcement of a judicial order restricting expressive activity near the courthouse.

That bizarre order, issued by Michael A. Martinez, chief judge of Colorado's Second Judicial District (which covers the city and county of Denver) on August 14, originally banned essentially all expressive activity—including "demonstrating," "picketing," "protesting," "marching," "parading," "holding vigils or religious services," "proselytizing or preaching," and "distributing literature or other materials"—anywhere near the courthouse. Martinez, the state judge, subsequently revised the order to cover a smaller part of the courthouse grounds, but it still struck Lane as blatantly unconstitutional, so he added it to his motion for a preliminary injunction.

Although FIJA suspected that the speech-suppressing order was aimed at jury nullification activists, Steven Steadman, security administrator for Colorado's courts, testified that the restrictions were motivated by concerns about possible unrest following the sentencing of Dexter Lewis, who was recently convicted at the Lindsey-Flanigan Courthouse of stabbing five people to death at a Denver bar in 2012. Steadman said the fear was that there would be a violent reaction if Lewis, who is black, was sentenced to death while Aurora movie theater shooter James Holmes, who is white, received a life sentence. But Steadman conceded that the security issue could have been addressed with a much narrower approach.

In prohibiting enforcement of the speech restrictions, Martinez, the federal judge, noted that the city and county of Denver, which owns the courthouse, had conceded that the plaza outside of it, which has frequently been the site of protests and demonstrations, qualifies as a "public forum." Denver officials also said they did not plan to enforce the state judge's limits on expressive activity. Furthermore, Denver stipulated that "Plaintiffs who wish to engage in peacefully passing out jury nullification literature to passersby on the Plaza are entitled to do so and that Denver, through its police or sheriff department, will not arrest or otherwise charge Plaintiffs for handing out literature regarding jury nullification so long as Plaintiffs do not violate Colorado law or Denver's Revised Municipal Code when they are handing out their literature." The city and county added that "Plaintiffs' proposed intent of peacefully handing out jury nullification literature to or discussing jury nullification with passersby at the Plaza, without more, does not violate Colorado law."

So does that mean Denver District Attorney Mitch Morrissey plans to drop the jury tampering charges against Iannicelli and Brandt? Not according to Lynn Kimbrough, Morrissey's public information officer. "Their charges still stand," she says. "They weren't arrested for passing out literature. They certainly have a free speech right to do that." Rather, Kimbrough says, quoting Colorado's jury tampering statute, they were arrested for seeking to "communicate with a juror" outside of a judicial proceeding in an attempt to influence the juror's "vote, opinion, decision, or other action in a case." But neither the affidavits supporting the arrests nor the charges from Morrissey's office allege that Iannicelli or Brandt tried to affect the outcome of any particular case. The affidavits mention the Dexter Lewis trial, but Lane says his clients did not even know it was happening.

The affidavits also say Iannicelli and Brandt handed people pamphlets after asking if they had been called for jury duty. The pamphlets received by seven jury pool members were the basis for the seven charges against each defendant. Is asking what brings someone to the courthouse the crucial difference between what Denver deems a crime and what it recognizes as constitutionally protected activity? Kimbrough won't say. When I press her to explain exactly how Iannicelli and Brandt crossed the line, she says she can't get into specifics about a pending criminal case. But she does say "there isn't anything in the federal judge's ruling that directly affects the allegations against these defendants."

Lane, not surprisingly, disagrees. He predicts the charges "will eventually be dropped." Either way, Morrissey has some explaining to do. If "peacefully handing out jury nullification literature to or discussing jury nullification with passersby at the Plaza, without more, does not violate Colorado law," what was the justification for arresting and charging Iannicelli and Brandt? What "more" did they supposedly do that transformed them from citizens exercising their First Amendment rights into criminal suspects?