Lower deficits for now, but debt remains on an unsustainable path. 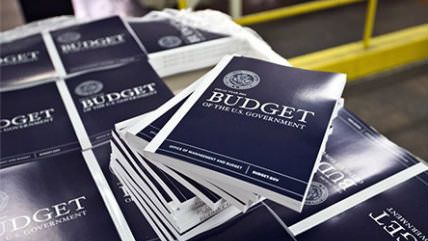 The Congressional Budget Office, Capitol Hill's nonpartisan budgetary scorekeeper, released a big report on the state of the budget and the direction it's heading. There's some good news—lower deficits—but there are also signs of serious trouble ahead, with total debt levels remaining on an unsustainable path.

The annual deficit for 2015 will be the smallest since President Obama took office. At $426 billion, the annual deficit is down again this year, dropping by $59 billion from last year's total, and hitting the lowest level its been since 2007. While that's still a pretty big number in raw terms, relative to the size of the economy, it's not; at about 2.4 percent of GDP, the CBO says, it's smaller than the typical deficit over the last five decades.

Tax revenues are up. The CBO says that federal revenue from taxes will jump 8 percent in 2015, to about $3.3 trillion. That means that roughly 18.2 percent of the economy will be diverted to the government this year. But even with rising revenue and lower deficits, there's still budget trouble ahead.

Total national debt levels remain on an unsustainable path. The CBO has been saying this for a while now, but its worth reiterating, especially given news that the deficit is down again this year. Despite increased revenues and a low annual deficit, we're not out of the woods: The debt is growing faster than can ultimately be supported. As CBO Director Keith Hall said, "The growth in debt is not sustainable. At some point, it's going to get to a very high level. Obviously, you can't predict tipping points, but at some point this becomes a problem." In other words, the budget is heading for some kind of crisis, and the question isn't if, but when.

After years of slower growth, Medicare and Medicaid are growing more rapidly again. Following news earlier this year that national health spending growth had started to quicken once again, the CBO estimates that major health programs—mostly Medicare, Medicaid, and Obamacare—will cost 13 percent more this year than last, adding up to about a $106 billion difference. The biggest contributor to the boom in federal health care spending? Medicaid, which, will cost $49 billion more this year, a year-over-year increase of about 16 percent, thanks largely to the expansion of Medicaid coverage under Obamacare.

The new CBO director, appointed by Republicans, doesn't believe that tax cuts "pay for themselves."

This isn't strictly part of the report, but it's still notable. During a press briefing, CBO Director Hall, who was appointed earlier this year amid GOP-led discussions about whether the CBO should adopt dynamic scoring, which attempts to estimate whether tax cuts have economic feedback effects that can result in the replacement of lost revenue to the government, Hall said that, as far as he and the CBO are concerned, tax cuts don't spur enough economic activity to replace lost revenue. No, the evidence is that tax cuts do not pay for themselves," Hall said, according to The Hill. "And our models that we're doing, our macroeconomic effects, show that." Sorry, Republicans—if you want to cut taxes without hiking the deficit, you'll have to cut spending too.