"Gross Domestic Product" measures that include warmaking are not a good measure of citizen well-being. 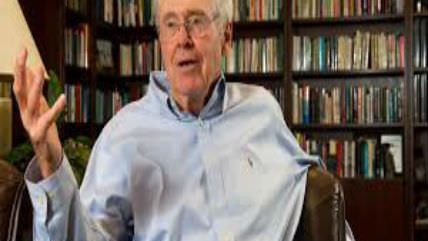 The venerable, doddering Time magazine ran a ridiculously misleading headline designed to make billionaire financier of conservative and libertarian causes Charles Koch seem like even more of a monster than they doubtless assume their audience already thinks he is. (Koch's brother David Koch is on the board of trustees of the Reason Foundation, which publishes Reason.)

It read: "Charles Koch says U.S. can bomb its way to $100,000 salaries: Building bombs and using them is one way to growth, the billionaire suggests to allies."

What James Bond supervillainy he's up to, and right in front of Time reporters, it seems!

If you go to the story now, it has the less blatantly maligning hed: "Charles Koch Mocks Common Measure of Prosperity."

The URL still has the telling phrase "charles-koch-bomb-economy/"

But the story shows the author still didn't get the point. Koch comes from an intellectual background that many reporters don't have a clue about—movement libertarianism, via the likes of Robert LeFevre, F.A. Harper, and Murray Rothbard.

They actually had the temerity to question constitutive aspects of the modern state-academic axis, including, believe it or not, the mighty oracle of Gross National/Domestic Product.

A key aspect of the Rothbardian/modern Austrian critique was that counting government expenditures in GDP figures made them inherently misleading as any kind of measure of citizen well-being, since, in Rothbard's estimation, the very fact that government was spending it rather than any citizen of his own free well made its contribution to freely chosen well being dubious.

Rothbard even suggested subtracting government spending from private production for a truer measure of freely chosen well being.

It is from this perspective that Charles Koch was speaking in the presentation Time's Philip Eliott writes about, and Eliott doesn't seem to get it at all:

One way to get [to average American incomes of $100,000 annually]? Building and using more bombs, [Koch] jokingly told about 450 donors to the political network he backs.

"I think we can have growth rates in excess of 4%. When I'm talking about growth rates, I'm not talking about that GDP, which counts poison gas the same as it counts penicillin," the 79-year-old industrialist said, veering off his prepared remarks. "What a monstrous measure this is. If we make more bombs, the GDP goes up — particularly if we explode them."

His audience laughed, clearly getting the joke.

I don't know why the audience laughed, but it wasn't a joke. It was a very serious point about both a core defect in GDP, and a core defect with the state: it's the entity that takes money out of the productive economy to make bombs and intimidate and kill people or destroy valuable property with them.

That is, in a very Rothbardian locution, monstrous. It ain't a joke, Mr. Eliott.

"Maybe we make more bombs," he said, trailing off. "I'm just kidding. I won't go there."

That was a bit of dark humor, and likely it would have been better had he not indulged in it. Might have avoided that crummy headline which will doubtless haunt Facebook poster memes for an eternity despite Time changing it.

Koch was making the broader point that economic growth compounds from year to year. A modest gain early pays greater dividends later. To that end, Koch is trying to make 4% a target for growth.

Kind of, but the core of what Eliott was just discussing was a "broader point" about government's drag on the economy, the lie at the core of GDP measurements, yoked to a very vivid antiwar statement.

Both the author and the original headline writer did a yeoman's job in helping readers not understand any of that.