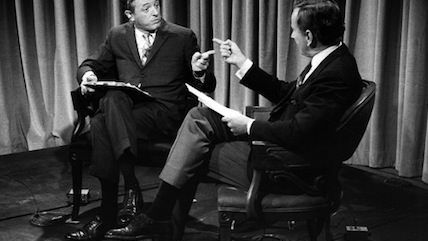 Best of Enemies, a documentary about Gore Vidal and Bill Buckley's televised debates during the 1968 presidential conventions, makes its theatrical debut today. I haven't watched the movie yet, but I'm very familiar with the infamous exchange at the core of it—the part where Vidal said Buckley was a "crypto-Nazi" and Buckley replied by calling Vidal "you queer" and telling him to "stop calling me a crypto-Nazi or I'll sock you in the goddamn face and you'll stay plastered." A brief clip of that moment has been on YouTube for ages, and as I write it has a view count of 882,411.

Not nearly as many moderns have seen the full 13-minute-plus segment that culminated in that moment (current view count: 83,492), so I've embedded it below. The evening's topic was the police riot then underway in the streets and parks of Chicago, where the Democratic convention was taking place. The immediate context for Vidal and Buckley's insults involved a group of demonstrators in Grant Park who had decided to lower the American flag. I've seen several competing claims about what exactly the protesters ran up the pole in its place, including some accounts in which it was someone's underwear, but on the program that night it was described as the banner of the Viet Cong.

Whatever sort of flag or long johns it was, the stunt had sparked one of the week's many bursts of violence. The host asked Vidal whether "raising a Nazi flag in World War II would have had similar consequences." Vidal took the position that freedom of speech includes the right to wave whatever flag you want. Buckley, sticking with the host's World War II comparison, commented that "some people were pro-Nazi" and that they deserved to be shunned. Vidal then declared that "the only pro- or crypto-Nazi I can think of is yourself," and with that Buckley unleashed the q-word and threatened to beat Vidal up.

That's the short version. The whole reel is here:

There is, as you might have guessed, a lot of backstory to this. Vidal and Buckley had been sniping at each other for several years, going back to their alternating appearances on the Jack Paar show in 1962. Beyond that, Jeet Heer argued this week in The New Republic that the phrase "crypto-Nazi" got under Buckley's skin for reasons related to his personal background. (Buckley's father was an anti-Semite, and as a youngster Bill had shared that outlook before outgrowing it.)

And then there's "you queer." Vidal made no secret of the fact that he had sex with men, and this was not the first time Buckley had cited his sexuality in such crude terms. (In the '60s, queer was crude indeed—this was long before the word had been "reclaimed" by Queer Nation, queer theory, and so on.) Back in 1962, after Vidal had criticized Buckley on Paar's show, Buckley had sent the host a telegram instructing him to "PLEASE INFORM GORE VIDAL THAT NEITHER I NOR MY FAMILY IS DISPOSED TO RECEIVE LESSONS IN MORALITY FROM A PINK QUEER." He added that if Vidal "WISHES TO CHALLENGE THAT DESIGNATION, INFORM HIM THAT I SHALL FIGHT BY THE LAWS OF THE MARQUIS [sic] OF QUEENSBERRY." This was presumably a double allusion, covering both the Marquess' role in publicizing Oscar Wilde's homosexuality and the rules he endorsed for the sport of boxing. (It thus presaged both "you queer" and "sock you in the goddamn face.") The telegram is quoted in Buckley's account of his war with Vidal, published in Esquire in 1969.

Buckley's magazine sometimes invoked Vidal's sexual proclivities as well, never in a friendly manner. At some point, Vidal evidently decided to needle Buckley with innuendos of his own. In earlier installments of their '68 debates, he had called the conservative "the Marie Antoinette of the right wing" and told him that "if there were a contest for Mr. Myra Breckinridge, you would unquestionably win it." (Myra Breckinridge is the transsexual title character in one of Vidal's novels.) When Buckley had his outburst, lines like that were surely simmering somewhere in his mind. (They were certainly on his wife's mind. "Two hundred million Americans think William F. Buckley is a screaming homosexual," she told Murray Kempton after one of Vidal's barbs, "and I've got to do something about it.")

After the debates were finished, Vidal's intimations became more overt. His response to Buckley's Esquire piece, also published in Esquire, includes this passage:

Buckley begins his tirade with, I should have thought, a most dangerous quotation from The East Village Other to the effect that Buckley has been found guilty of exercising "faggot dialectic." The implication is plain. The writer thinks that Buckley is a faggot. He is not alone. Norman Mailer even shouted the word "fag" at Buckley during a Les Crane taping: It was cut from the show…how innocent television was before Chicago last summer! Now Buckley's private life should be a matter of no concern to The East Village Other or even to that vivacious compendium The Homosexual Handbook whose listing of well-known degenerates includes, on page 261, "William F. Buckley: Writer, professional candidate. Mr. Buckley hosts a television program and conducts it with a flourish and a zest, with such brilliant gestures and hand movement, that Gore Vidal is reported to have called him 'the Marie Antoinette of American politics.'" Now to include Buckley in a list of homosexuals is doubtless slanderous. In any case, every public figure is vulnerable to this sort of rumor, which is why it seems to me odd that someone like Buckley, himself suspect, should be so quick to smear others as "queers."

There is more of this in the rest in the article, and for that matter in comments that followed the article. The writer Bill Kauffman, who corresponded with Vidal for many years, tells me that the novelist questioned Buckley's heterosexuality in a letter in the early 1990s. This would have been around the same time Buckley published his book In Search of Anti-Semitism, which among other things called Vidal "genuinely and derisively anti-Semitic." Buckley stopped short of pronouncing his rival a crypto-Nazi, but it still feels a bit like those old accusations from '68 had been reversed.

But that's enough on the sexual politics of celebrity feuds. Beneath the blustering insults, that old shouting match at the convention contains a still-relevant debate about free speech and police violence. You really should watch the whole thing, and not just its famous crescendo.