He emphasizes the importance of making shorter sentences retroactive. 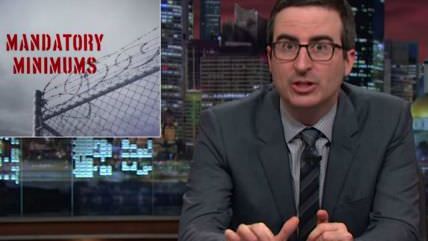 In a recent Last Week Tonight segment, John Oliver highlights the injustice of mandatory minimum sentences, noting the emerging bipartisan consensus in favor of reform. Among other prisoners serving unconscionably long terms, he mentions Weldon Angelos, who got 55 years without parole for possessing a gun during three small-time marijuana sales.

Oliver emphasizes the added insanity of failing to make lighter penalties retroactive, which means that thousands of people continue to serve terms that almost everyone now recognizes as excessively harsh. He also notes that Obama and the nation's governors could do a lot more to ameliorate such injustices through their clemency powers.

[Thanks to Tony Newman for the tip.]