The move is a reminder that Obamacare is a joint operation between the government and the health insurance industry. 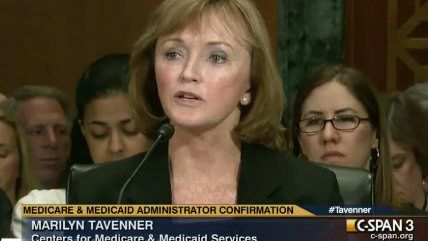 In January, Marilyn Tavenner stepped down from her position as the head of the Centers for Medicare and Medicaid Services (CMS).Tavenner was one of the administration officials most involved with the flopped launch of Obamacare's federal health insurance exchange—the administration sent her to Congress to apologize—and her agency crafted thousands of pages of regulations ordered up under the law.

Essentially, Tavenner played the role of Obamacare's caretaker within the administration, helping to craft its many tedious rules and procedures while serving as a public face when implementation failed.

Earlier this week, news broke that Tavenner would be joining America's Health Insurance Plans (AHIP), the health insurance lobbying group, as chief executive. Tavenner, in other words, will continue to be Obamacare's caretaker—only now she'll be operating from the private sector.

At this point, though, "private sector" is practically a misnomer.

Obamacare does not nationalize health insurance, but it turns the industry—already subject to extensive, (though mostly state-based) mandates and regulations—into a kind of quasi-public utility: a heavily subsidized, federally regulated product, with profit margins capped and rates subject to regulatory review, sold through government designed and run marketplaces to people who are required by law to buy the product.

Tavenner's move not only highlights the link between government and industry, but strengthens it. As Philip Klein writes at The Washington Examiner, Tavenner "has a web of connections within the Obama administration and an intimate knowledge of how it works. But her being at AHIP is also valuable for the administration, because it means that the insurance industry's main lobbying group will now be headed by a cheerleader for Obamacare."

Under Obamacare, health insurance is nearly as much a product of government as it is of the private sector—a joint operation conducted in tandem by a revolving cast of public officials and private sector interests.