Cop said someone called about the smell of marijuana, said he smelled it too. No marijuana was found, but there are always other charges 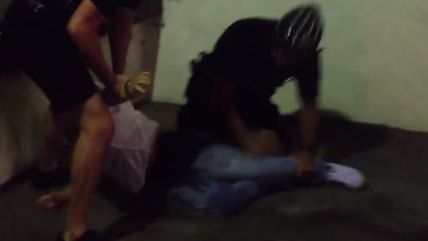 Three Florida teens say they were waiting for their Uber driver after a concert in downtown Orlando, in a parking garage to get away from the rain, when they were approached by a bicycle cop who said a resident had called and said she heard teens in the garage and smelled marijuana. The cop eventually told the teens he could smell marijuana too and that they were being detained.

One of the teens pulled out their cellphones, and two teens passed it among themselves in an effort to keep it away from the officer, before the cop moved on to subduing one of the teens, while he was still being filmed. The cellphone video shows the cop taking the teen to the ground and then punching him a number of times while the teen already appears subdued and another cop had already arrived.

One92 has a portion of the video the teens took:

The two cops eventually arrested all three teens but, according to One92, the cops found no marijuana. Two of the teens were reportedly charged with trespassing, while Ryan Diaz, the one seen being punched by the police officer, was reportedly charged with battery on a law enforcement officer and resisting an officer without violence and taken to jail.

In Florida, you have the right to record a police officer if you are in a public place with no reasonable expectation of privacy and aren't interfering with a "legal duty being performed by the office." The resisting without violence charge comes from a statue making resisting, obstructing, or opposing  "any officer in the execution of legal process or in the lawful execution of any legal duty" a misdemeanor.