Chris Christie is Running as a Budget Reformer. But His Own State Budget Is a Wreck. 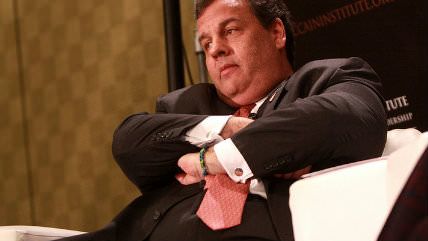 Two years ago, New Jersey Gov. Chris Christie looked like the early-early-early frontrunner in the 2016 GOP presidential race. The New York Times profiled him as the establishment candidate, but his no-BS demeanor and style of rhetoric appealed to large swaths of the party's base as well.

But Christie's proto campaign crashed before it even got off the ground. He was foiled in part by the aura of scandal surrounding Bridgegate, and in part because he was better positioned for a 2012 run. As Jonathan Last of The Weekly Standard points out in this morning's Transom* newsletter, "Had he jumped into the race late, he would have had a very good chance of toppling Mitt Romney by consolidating the anti-Mitt vote and siphoning off a good deal of establishment support." You could say he peaked too early, hoping to consolidate 2016 Republican establishment support before the race even began. But in another sense he peaked too late—gathering steam in 2013, the year after a presidential election.

And, as Last points out, there's another problem with what now remains of the Christie campaign: He's not just a tough-talking candidate, he's also a governor, and his home state isn't doing so well. The state's economy lags behind others; it still hasn't made up for jobs lost in the recession. And, perhaps relatedly, its budget is a mess too.

New Jersey is one of just three states (along with Illinois and Pennsylvania) that a new report on state fiscal health from The Mercatus Center flags for its underfunded pension programs. The report by Eileen Norcross ranks states in a variety of budget-related categories, and notes that Jersey is among a handful of budget-challenged states "with large long-term debts, large unfunded pension liabilities, and structural budgetary imbalances." This helps ensure that it stays at the bottom of the barrel on many measures of fiscal stability. Indeed, in the Mercatus report, Christie's state ranks as the worst of the nation on budget solvency and long-term solvency. New Jersey ranks next to last on "fiscal condition."

This sort of performance is already potentially deadly in a race that already features one union-battling governor who is running on his record of state budget and economic accomplishments. It's even more of a drag for a candidate who has said he wants to make national budget troubles, and in particular entitlement reform, a key campaign issue. (Entitlement spending is "growing the deficit and slowly but surely taking over all of government," he said in April. "In the long term, it will steal our children's future and bankrupt our nation.") I welcome any attempt to inject discussion of meaningful entitlement reforms into the presidential debate, but it's hard to take Christie's no-nonsense budget reformer pose very seriously when he has so obviously struggled to get his own state's fiscal house in order.

(*I'll be writing this Friday's edition.)