It's 2015, and the British Government Is Considering Expanding the Drug War Faster

U.K. wants to be able to ban chemicals more quickly. That's going to be a disaster. 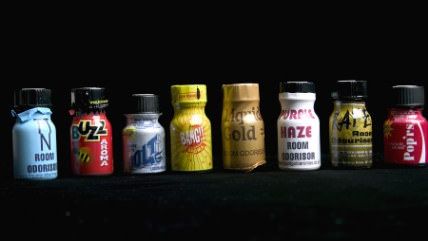 The war on drugs has led to a sort of legal arms race as the government tries to outlaw various chemical compounds that make people (particularly young people) feel things the government for some reason thinks is wrong for them to feel. Outlawing chemicals then prompts illicit drug manufacturers to look for alternatives. And then the government bans or regulates those chemicals, and so on and so on, and soon the average Joe has to show a driver's license just to buy cold medicine.

The United Kingdom has the Misuse of Drugs Act of 1971 to oversee its system of criminalizing and managing controlled substances. The U.K. is looking to update the law to actually make it easier to ban more mind-altering chemicals as they come around with the Psychoactive Substances Bill. It appears that the Conservative Party is looking to take to a new, absurd level: They want to create a blanket ban of all psychoactive substances. All of them, with some exceptions.

The problem is that lots of psychoactive substances are very helpful, and a blanket ban just to prevent kids from getting high legally (that's the justification for this) is going to have disastrous consequences. The Advisory Council on the Misuse of Drugs (ACMD) in London sent a warning letter (pdf) that there would be some serious unintended consequences:

"The ACMD … cautions against a blanket ban on all psychoactive substances. It is almost impossible to list all the desirable exemptions under the Bill. As drafted, the Bill may now include substances that are benign or even helpful to people including evidence-based herbal remedies that are not included on the current exemption list."

Furthermore, the ACMD notes that the way the new law is approached completely divorces drug policy with analysis of harm when determining what to ban. A blanket ban doesn't take into account the psychoactive substance is actually harmful; therefore, those who provide benign or beneficial drugs could be prosecuted.

Fortunately the new rules would target suppliers and not users, but AMCD worries that the law would be used to snag "social suppliers," those who bring drugs for their friends in the club scene, et cetera. They worry the bill would be used to target minorities to bust them for petty crimes, treating them like drug dealers just for handing out high-inducing nitrate inhalants (commonly known as "poppers") or other recreational drugs made from banned chemicals to buddies.

Sadly, the AMCD is in favor of bans on psychoactive substances, as long as they're more carefully considered than what's being presented from the government. But there are additional unintended consequences even when chemical bans are more clearly targeted. In the United Kingdom, they've seen an increase in eye damage caused by the use of popper inhalants. Why? Because the European Union banned one popular chemical combination—isobutyl nitrate. This didn't stop people from manufacturing and using poppers. Instead they switched to isopropyl nitrate in 2007, and that's when European countries started seeing the eye problems. It's a health problem actually manufactured by the government's desire to control how people enjoy themselves.

The government can't stop people from pursuing happiness through chemistry, and even the AMCD knows full well of the dangers of attempting to do so with too broad a brush. But even the kinds of bans the AMCD supports may not accomplish what it thinks it will accomplish.