WATCH: Happy 4th of July From Remy (and the NSA)! 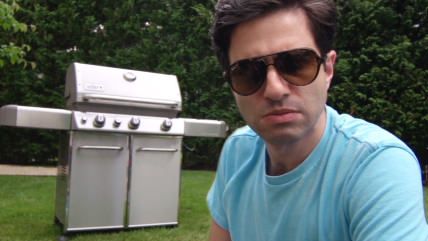 Happy 4th of July from Remy (and the NSA)!

Song written and performed by Remy. Video produced by Meredith Bragg. About 1:20 minutes.

For all of Remy and Reason's collaborations, go here

LYRICS
Fourth of July, a Fifth of Patron
Celebrating it with all the girls that we know
Yeah, today is the day they put paper to quill
and said the government can't be all up in your grill

Kielbasa and hot dogs, brats, a sauerkraut box
It's like we're living in Anthony Weiner's outbox
Billy's pouring drinks, yeah it's gonna be monstrous
Gary's swimming with his shirt on (I'm self-conscious)

Super Soaker fights, but nobody is getting me
Fleeing from that water like my name was Ted Kennedy
It's the land of the free, we put paper to quill
and said the government can't be all up in your grill, cuz I–