The students' side files their appeals brief in the historical Vergara case overturning teacher firing practices that harm kids. 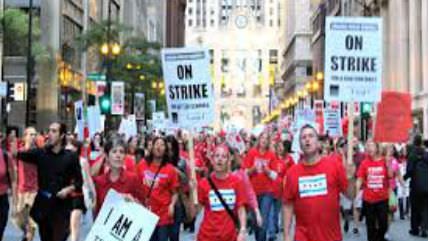 A little over a year ago, a group of nine California students with the help of the activist group Students Matter won an amazing victory in California Superior Court in the case of Vergara v. California.

As I reported at the time:

Judge Rolf M. Treu reasoned that the challenged teacher rules—regarding permanent employment status, dismissal procedures, and a "last in first out" rule for layoffs—do indeed damage California children's constitutional right (on the state level) to an education. He wrote that the challenged statutes "cause the potential and/or unreasonable exposure of grossly ineffective teachers to all California students" and "to minority and/or low income students in particular, in violation of the equal protection clause of the California constitution."

"Evidence has been elicited in this trial," the Judge writes, "of the specific effect of grossly ineffective teachers on students. The evidence is compelling. Indeed, it shocks the conscience." He was convinced by expert testimony that bad teachers can cause over a million in lifetime earning losses for students, and cost them 9 months of learning per year compared to students with even average teachers. He estimate 2,750 to 8,250 inferior teachers active in California now.

"Plaintiffs have proven, by a preponderance of the evidence, that that Challenged Statutes impose a real and appreciable impact on students' fundamental right to equality of education and that they impose a disproportionate burden on poor and minority students."

Naturally, the losers appealed, and Judge Treu stayed actual enforcement of his ruling pending appeal. Today, the Students Matter side filed their brief in the appeal process in the Court of Appeal for California, 2nd appellate district.

Excerpts and summations of the brief's arguments, explaining powerfully how and why the original decision was correct:

the Superior Court explained exactly how the Challenged Statutes cause school districts to be stuck with grossly ineffective teachers. Based on "extensive" and "compelling" evidence presented during a two month trial…the court found that:

• The Permanent Employment Statute forces school districts to make tenure decisions after teachers have been on the job for only 16 months—far too little time to be able to predict with accuracy whether a teacher will be effective at teaching students. As a result, districts grant permanent status year after year to some grossly ineffective teachers— teachers who would be screened out if districts had more time to make considered decisions.

• Once those grossly ineffective teachers obtain tenure, a series of three Dismissal Statutes makes it virtually impossible for districts to remove them from the classroom. Remarkably, in the entire state of California, only 2.2 teachers are dismissed on average, each year, for unsatisfactory performance —only 0.0008% of the nearly 300,000 teachers statewide…..School districts must spend years, and hundreds of thousands of dollars, in order to have any chance of dismissing a single grossly ineffective teacher—and even then, their efforts are likely to fail. As a result, district administrators are left with no choice but to shake their heads, hold their noses, and assign these teachers to classrooms full of unlucky students every year.

• Then, when economic downturns or declining enrollment force school districts to conduct layoffs, administrators are still prevented from removing these grossly ineffective teachers—forced instead by the Last-In First-Out ("LIFO") Statute to fire some of their best, most beloved, most effective teachers, based almost exclusively on those teachers' lack of seniority. It is not uncommon for a teacher to be named "teacher of the year" and laid off the same year…Even worse, the Challenged Statutes result in a well-known phenomenon called the "Dance of the Lemons," causing disproportionate harm to poor and minority students throughout California. ….As a result, AfricanAmerican and Latino students in Los Angeles are 43 and 68 percent more likely, respectively, to be taught by grossly ineffective teachers than white students.

The brief goes on to address and debunk the state's main appeal arguments, which roughly speaking include that the court should just let the state legislature have its way on matters of teacher hiring and discipline; that the plaintiffs are merely making arguments about preference when it come to running the school system that don't rise to the level of violating students' right to equal protection under the California constitution; and that, well, if administrators were smarter and more efficient they could run their schools in a manner that doesn't mess up their students' lives without overthrowing the teacher protections at issue. None of those arguments, this brief does a good job showing, seem very convincing, and they certainly weren't to Judge Treu.

In a press conference call this morning announcing the brief, lawyers on the Students Matter side say they still need to wait for the teachers side to file its response brief and then await an actual court date. Once the hearings are over, though, a decision must come within 90 days, but that could still be a very long time away–more's the pity for California public school students.

But the lawyers say they are very confident they will win. Laywer Theodore Boutrous said that in California appeals courts, the court is supposed to defer to the specific factual findings of the original court, which were overwhelmingly on the side of the conclusion that the teacher protections harm students. Boutrous also poked fun at their teachers union opponents for having the nerve to call the Students Matter side "well funded" in this fight. As I wrote in my first report on the Vergara case in February 2014:

while teachers unions have complained about the suit being funded by a politically interested millionaire, the CTA is the biggest, richest political force in the state, spending in the '00s more than $211 million on political giving and lobbying—nearly twice the amount of the nearest competitor in political influence, the Service Employees International Union.

A great Reason TV feature from January on the original court victory, which gives the human face of children harmed by California's teacher-proection-above-all system, a system hopefully tottering and ready to fall after this appeals process plays itself out: