State and federal governments set to clash, according to a report from BuzzFeed News. 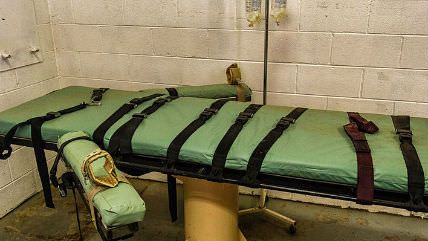 Last month, my colleague Lauren Galik wrote about the atypical drama that unfolded when the Nebraska legislature overrode, by a single vote, the governor's veto of a law abolishing the death penalty in the state. Now the situation has gotten even more interesting.

BuzzFeed News has twice reported that the Food and Drug Administration (FDA) is planning to stop a shipment of sodium thiopental when it arrives from India. The drug, which Gov. Pete Ricketts (R–Neb.) plans to use to execute 10 inmates, is banned in this country:

"Please give me a call when you have time to discuss," Nebraska Corrections Director Scott Frakes recently wrote to the would-be supplier of the state's execution drugs. His email contained an attachment: a 2013 court ruling that spells out that the drugs the state spent more than $50,000 on would not be allowed into the United States.

The drugs aren't approved by the Food and Drug Administration, and the court ruling that Frakes attached makes it clear that the FDA has no choice but to seize the drugs when they come to the states.

The shipment, enough for hundreds of lethal injections, is expected to arrive any day now, according to public records and emails obtained by BuzzFeed News.

An FDA representative has already, according to the story, warned the state that "there is no FDA approved application for sodium thiopental, and it is illegal to import an unapproved new drug into the United States." But Nebraska's chief executive says Nebraska isn't "bound" by the court decision requiring the FDA to seize all incoming shipments of the execution drug—and that the legislature doesn't have the authority to change existing death row prisoners' sentences.

The conflict presents libertarian opponents of both capital punishment and big government, like me, with a conundrum: Should the FDA's smackdown of a decision by a duly elected executive about how to govern his state be welcomed or denounced?

My disdain for agents of a heavy-handed federal bureaucracy is strong, but so is my conviction that the death penalty has no place in America today. To the extent that there are conditions under whch government intervention is justified, halting a sadistic practice that has already led to the state-sanctioned taking of innocent human lives seems like a strong contender. But is it worth embracing a precedent of federal agencies' powers outweighing states' decision-making rights?

The good news is that the veto override in Nebraska suggests the tide is turning against capital punishment. As such, I'm hopeful we're heading for a time when executions are a thing of the past because the people in all 50 states demanded an end to them—no federal intervention necessary.