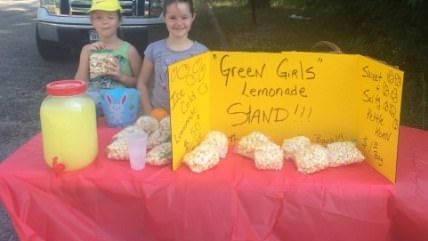 Technically summer doesn't begin for another couple of weeks, but southern states like Texas don't care when summer is technically supposed to start. It's warm down there, and two young sisters in Overton with the adorable, media-friendly names of Andria and Zoey Green (8 and 7 years old, respectively) decided to sell lemonade to raise money for a father's day gift (a trip to a water park, because summer!).

Cut to the "you can't do that"-ery from the government. From KTLV:

They had been open for about an hour and had already made more than $25, when police showed up, initially because they were set up near the curb in a residential street.

"A code enforcement officer and the chief, she called me to the side and said we needed a permit," [mother] Sandi [Evans] recalls.

The City agreed to waive the $150 fee for a 'Peddler's Permit," but the health department would prove a bigger problem.

Police Chief Clyde Carter explains, "It is a lemonade stand but they also have a permit that they are required to get."

It gets better, by which I actually mean worse. They can't get this permission that they need to get. Texas has legislation to regulate home cooks. Food that requires any sort of temperature control to prevent spoilage cannot be sold without inspection and a permit. Lemonade qualifies under this rule because it could grow bacteria if left out. (A quick Google search has not provided much information about whether this is a claim to be treated seriously. It is possible, but it seems the acidity of the lemons reduces the risks.)

I should point out that HB 970, passed in 2013, is intended to make it easier for home cooks. If the little moppets had been selling canned jam or homemade pickles, they would have been just fine. The kettle corn the girls' were also selling is covered under the rule. But lemonade is not. You can read Texas' home cook rules here. Keep Food Legal's Baylen Linnekin wrote about Texas' regulations positively in 2013 for Reason here. Believe it or not, Texas' laws on home food preparation and sales are actually better than they used to be.

This is getting lots of media attention because it's the government boot coming down on the necks of cute little children. If it were some filthy homeless man trying to raise money to pay for a night's sleep at a hotel, a lot people outraged over this incident would likely be cheering on the police.

More from Reason on regulations that crush the entrepreneurial spirit of little kids here.