Is Free Speech Under Attack in America? 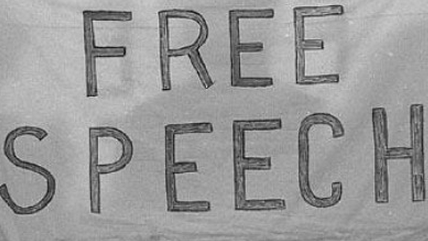 Reason's Elizabeth Nolan Brown wrote this week about the prosecution of a Montana man who posted anti-Semitic and Holocaust-denying Twitter rants. Brown wrote:

While this sort of prosecution is common in parts of Europe, Americans enjoy the protection of the First Amendment, which contains no exception for what's colloquially known as "hate speech." The only permitted exceptions to free speech protections—as the Supreme Court recently re-articulated—are for obscenity, defamation, fraud, incitement, and "speech integral to criminal conduct."

Earlier this year, Reason Editor-in-Chief Matt Welch spoke in great detail about the many attacks on free expression in America today.

"Is Free Speech Under Attack in America?"

About 30 minutes. Camera by Paul Detrick and Zach Weissmueller. Edited by Amanda Winkler.

Original release date was April 24, 2015 and the original writeup is below.

"At some point it is inherently ridiculous when you can't laugh at Neil Patrick Harris making jokes on the Academy Awards," says Matt Welch, Reason Editor in Chief. At Reason Weekend 2015, the annual donor event for the nonprofit that publishes this website, Welch discussed how today's society, full of trigger warnings and a sensitivity to opposing ideas, has lead to a watered down approach to the First Amendment.

"It's not fun when you're walking around policing jokes all day long, it's not an attractive pose to people," continues Welch.