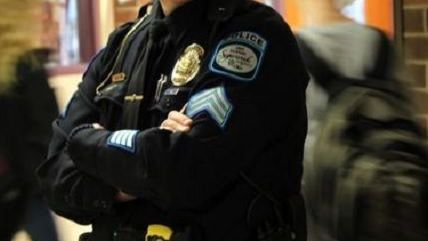 The overwhelming urge of some people to lay all their responsibilities at the foot of a government they want involved in every aspect of life leads to what ought to be bizarre arrangements, like the presence of uniformed police officers (the so-called "school resource officer" in public schools—an abdication of responsibility by teachers and administrators, paid to, among other things, instill discipline in their charges, and by parents and guardians, for now still generally their offspring's primary caretakers. The Los Angeles school district has its own police force—the problem of police in schools isn't just one of responsibility, it's one of an inability to prioritize too. Liberals, like the ones who run Los Angeles, can't be bothered to choose what's more important for their government to do, so they'd prefer money be spent everywhere, from getting condoms onto porn sets to getting students iPads to building up a parallel LAPD for kids only.

With more police officers in schools, it comes as no surprise that more student misbehavior is treated like crime. Even the federal government is concerned, although it appears more worried about the "disparate impact" (the fact that non-white children are disciplined at a higher rate than white children) of the policy rather than the policy of turning students into potential criminals itself.

Investigators said the incident was caught on surveillance cameras.

In the arrest report investigators said Badia intentionally shoved the teen, slammed him to the floor and "torqued" his wrist for nearly a minute, for no apparent lawful reason.

The report continues saying, school video shows the boy "wincing in pain while on the ground."

Badia wrote in his own report the child "pushed the officer's hands away in a resistant manner … and flailed his arms."

Badia was placed on paid leave and a concurrent internal investigation was open. Will other school resource officers around the country point to this incident as a reason they're afraid to do their jobs? The same argument's been made about cops on the street ever since the issue of police violence started getting more of the national attention it deserved.