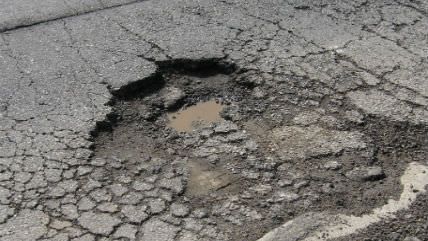 The main question about Ted Rall after all these years is whether the rancid cartoonist's draftsmanship is as miserable as his logic. (Look to the right to see that tension play out in real time.) In an L.A. Times opinion piece about potholes yesterday, however, Rall's horrendous argumentation may have finally gained the upper (lower?) hand.

Here's your spit-take of a headline: "Potholes and crumbling roads, brought to you by libertarian negligence." Come again?

Actually, I know the answer. I've seen the state of roads after decades of libertarianism/negligence — and my back has felt it — in Afghanistan before the U.S. began road reconstruction around 2005.

Granted, Afghanistan has been laboring under the yoke of libertarian misrule for decades now, but what about the City of Angels? Well, the 15-member City Council—the one that recently passed the biggest teaching moment of a minimum wage hike in the country—contains exactly one registered Republican, and zero Libertarians. For the past 55 years the city has had exactly one non-Democratic mayor, widely derided by conservatives as a RINO. A political power structure once famous for anti-union sentiment has now become so thoroughly labor-dominated that local bosses don't even bat an eye about publicly lobbying for individualized carve-outs to laws they just pushed through.

Meanwhile, when it comes to potholes, the people who care about them longer than tax-hike day tend to be—wait for it!—libertarian, while the people who put scare-quotes around "pothole politics" tend to share more in common politically with Ted Rall. As I wrote in 2008:

In Los Angeles, my former city representative, Tom LaBonge, was tolerated as an eccentric for being the only member of the 15-member City Council to express genuine interest in street repairs (though the road in front of my house still had craters large enough to hide a baby). When a coalition of black, brown, and lefty-white politicians took over city government early this decade, one local alternative weekly urged the council to "think big" and not get bogged down in mere "pothole politics."

Rall's column starts off with this bit of delusional thinking: "The L.A. City Council approved a budget that would, among many other things, allow the city to fill 350,000 potholes." Why is that delusional? Because as Reason told you in 2011, we've been here before:

Angelenos […] voted in 2008 to approve a new county-wide sales tax, set at the seemingly reasonable rate of a ha'penny. Measure R was heavily advertised as a tax that would fix potholes,repair the county's disgraceful road infrastructure, and "get traffic moving." The Los Angeles County MTA's Measure R splash page highlights the road and driving elements of the measure, with its top bullet point noting that MTA has disbursed "$100 million for…projects such as pothole repairs, major street resurfacing, left-turn signals, bikeways, pedestrian improvements, streetscapes, traffic signal synchronization and local transit services."

More than two years in, Los Angeles now fixes nearly a third fewer potholes than it did before. According to the Measure R expenditure plan [pdf] a mere 15 percent of money from the sales tax is designated for road service. The largest portion goes to new rail projects, though only the Expo Line from USC is currently under active construction.

Literally every year, the city's debased political class promises to fix potholes forever if voters only approve this one last tax increase. Meanwhile, city monies are routinely squandered on everything but. L.A.'s own controller said as recently as last year that money is not the problem with street repair:

The streets bureau also does not always prioritize its repair work based on common-sense criteria such as traffic volume, heavy vehicle loads and mass-transit loads. So despite the slurry work that's taken place, some of the city's busiest and most important thoroughfares remain in the worst condition, impeding traffic and commerce, making bike riding unsafe and turning bus rides into bumpy, uncomfortable journeys.

Our auditors also found that the Bureau of Street Services has undercollected $190 million in fees from utility companies that cut and dig into our streets, money that could have been used to perform miles of repairs. Likewise, between 2011 and 2013, it did not fully utilize its budgeted funds. Auditors found that $21 million earmarked for street repairs was returned to various funding sources unused. And the city has also spent more to produce its own asphalt than it would have if it had paid a vendor for it.

So yes, go ahead and blame libertarians, Ted Rall. Meanwhile, for those who wish to actually solve rampant infrastructure problems in Democratic-dominated municipalities, you might want to consult the libertarian next door:

Thanks to serial tipster CharlesWT for the link.

UPDATE: On Twitter, Greta Kasatkina points to a UK cartoonist using a different tack to address potholes. I don't want to give it away, but let's just say his/her name is "Wanksy."