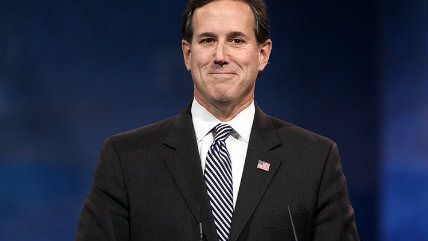 Former Pennsylvania Senator and sometime Republican presidential wannabe Rick Santorum is widely known for his awful grandstanding on conservative social issues, in large part because he both emphasizes his own positions on those issues and is prone to urging other Republicans to adopt his particular brand of self-certain social conservatism.

What's easy to overlook is that he's also terrible on economic policy.

For example, he's come out in favor of the Export-Import Bank, arguing that the subsidized lending operation "creates a level playing field" for business competition, and that opposition is representative of a "strain of libertarianism in the Republican party," which of course means it's something he's determined to oppose.

Santorum is a proponent of raising the minimum wage as well, complaining that Republicans who oppose lifting the federal wage floor don't "connect with average voters."

He's also an immigration restrictionist. He's said that in supporting "unlimited immigration," Democrats "sold their souls" for immigrant votes (does that imply that immigrant voters are the devil?), and has proposed restricting immigration as a form of wage of protectionism for domestic workers.

Santorum, who surprised lots of people with his strong showing in the 2012 GOP primary, is expected to officially announce another run later today, and while he's likely to continue emphasizing social issues, I suspect he pound the table for fearful economic populism as well. His most recent book was titled Blue Collar Conservatives and he's devoted a lot of recent airtime to grumbling about how the Republican party needs an "image makeover," which is probably true enough, just not at all in the way he imagines.

The good news is that with the large and extremely competitive GOP field this round, Santorum isn't putting up much of a showing so far, and his chances are incredibly slim. Part of the reason why his chances are so poor is that in a field this big he has almost nothing to offer that GOP voters can't find in another candidate.

At the top of the field, Wisconsin Governor Scott Walker is a midwestern evangelical son of a minister who talks frequently about faith and his support for middle-class families; Walker has recently hopped onto the immigration restrictionist wagon-train too.

Somewhat lower in the polls, there's former Arkansas Gov. Mike Huckabee. He's just as socially conservative as Santorum in all the way that matter, and is more than fluent in his own brand of inane populism when it comes to big economic issues. And Huckabee, for all his faults, is also far more personally likeable than Santorum, whose manner tends toward an ungainly and off-putting combination of smugness, arrogance, exasperation, false piety, and desperate self-regard.

So far, the GOP's reception to Santorum hasn't been terribly warm or enthusiastic. The lack of personal appeal, even more than his redundancy, is what's likely to keep him from being much of a factor in the Republican primary contest this round. It's not just that Santorum represents basically all of the worst parts of the contemporary GOP—it's that he does it so badly.