No, but is it too much to ask for representatives - even those from Florida - to not be jackasses *all* the time? 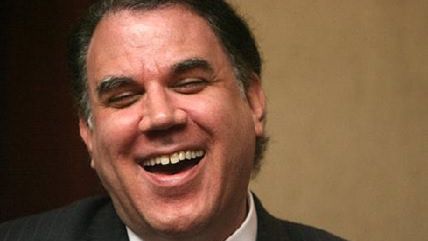 In many ways, no. He's reliably against war and is in favor of ending government surveillance. He believes in auditing the fed and marriage equality.

True, his views on most economic issues are a grab-bag of progressive lowlights and his defense of Obamacare is without nuance or apology. But, as I explain in my most recent Daily Beast column, what actually gets under my skin about Grayson, who represents Florida's 9th district, is thinking about running for Senate, and recently called the mother of his five children and wife of 15 years "a gold digger," is that he never misses an opportunity to lower the bar for public discourse.

As the self-styled "Congressman With Guts," Grayson has yet to reach bottom when it comes to throwing low blows. In 2009, for instance, while appearing on Jones' show and talking about the Federal Reserve, he called Linda Robertson, an adviser to Ben Bernanke, "a K Street whore."

"Here I am," he inveighed, "the only member of Congress who actually worked as an economist, and this lobbyist, this K Street whore, is trying to teach me about economics."

Perhaps Grayson was just nervous in his freshman year in Congress and trying to show off a bit too much. That same year he turned in the performance for which he is probably still best-known: his executive summary of the Republican health care plan alternative to Obamacare as "If you get sick, America, the Republican health care plan is this: Die quickly." He delivered that message, complete with props, from the floor of Congress.

In a tough 2010 re-election campaign, Grayson ran ads calling his Republican opponent, Daniel Webster, a draft dodger and, more improbably, "Taliban Dan," in a nod to Webster's social conservatism. Factually incorrect and overflowing with duplicitous editing, the commercials are pitch-perfect parodies of negative ads and are widely believed to have helped cost Grayson the election. Florida voters, accustomed as they are to reading about "Florida Man," don't always want his spiritual cousin representing them in Congress (Grayson would return to Washington in 2013, representing a newly redrawn 9th district).

Grayson is to Congress what Florida Man is to Twitter: "a never-ending series of cringe-inducing incidents, headlines, and actions that define—and defame—an entire state." Or in this case, an entire institution. He's not alone in defining dumbness down for Congress, but that's no reason not call him out, either.

Surely it's not asking too much that the folks running the federal government refrain from being jackasses in the way they comport themselves?