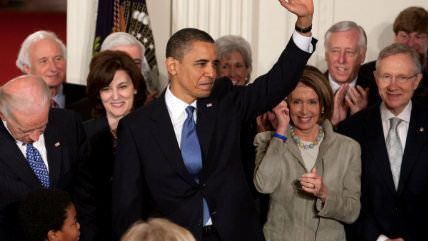 It looks increasingly like insurance premiums for many of the most popular plans sold through Obamacare's exchanges are on track for significant hikes next year. Earlier this week, I noted reports of requests for double-digit premium hikes—in some cases more than 30 percent—in dominant plans for the states of Maryland, Oregon, and Tennessee, as well as smaller but still significant hikes in a few other states. Today, The Wall Street Journal adds another, reporting that New Mexico's biggest individual market insurer is requesting a 51.6 percent increase in premiums for the coming year.

The primary reason for all of these giant hikes is the same, according to the Journal: "high medical costs incurred by people newly enrolled under the Affordable Care Act." As noted in a previous post, Moda Health, which insures about 100,000 people Oregon, says that its costs exceeded its premium revenue by 61 percent.

This is the same story that The Washington Examiner's Philip Klein heard from insurers when he looked into the looming rate hikes as well. Now that insurers have a year's worth of claims data, they can see that the people who have signed up so far are sicker and more expensive to cover than premiums so far will support. As a spokesperson for the health insurance lobby told Klein, "This year, health plans have a full year of claims data to understand the health needs of the Exchange population, and these enrollees are generally older and often managing multiple chronic conditions." Some of this is almost certainly just public positioning for the inevitable negotiations with regulators over rates; but the consistency of the story across multiple states suggests that a fair amount of it is real.

In any case, it goes back to what has been one of the chief worries about Obamacare for a long time—whether enough younger and healthier individuals will sign up for coverage to offset the higher costs incurred by older and sicker beneficiaries. So far, it looks like they're not, or at least not in numbers sufficient to support current premiums. And that's why it looks more and more like significant premium hikes are on the way, at least in some states, for some of the more popular plans.

It's hard to predict exactly what the impact of those hikes will be on consumers, because Obamacare's insurance subsidies, which are pegged to the price of mid-tier plans, will mean that most insurance plan members aren't personally exposed to the bulk of the increase. Even still, the few who are unsubsidized will have to pay somewhat more, and at the margins, that could mean that some people opt not to carry coverage instead. The penalty for remaining uninsured makes that harder, of course, but at a certain point, the math might still be enough to tempt some people to forego insurance coverage. The problem is that the people who do that are most likely to be the people who need it the least—the same class of younger, healthier people that Obamacare plans are already struggling to attract in sufficient numbers. And if that happens in large enough numbers, some of these plans will end up on track for a meltdown.

It's obviously far too early to reach any definitive conclusions at this point, and it's just as likely—perhaps even more likely—that plans will essentially stabilize with slightly low enrollment and somewhat higher than expected premiums. But the point is that, as with so much of Obamacare, there's an awful lot we don't yet know, and the risk for a more serious implosion is still there.